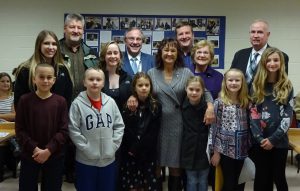 Chartered in 2008, approximately 250 kids in third through fifth-grade have been a part of the student-led, student-run group, sponsored by the Kiwanis Club of Minisink Valley.

Kiwanis clubs decide what community projects to undertake, based on their own community’s needs and their members’ interests. Service to children is a primary focus in Kiwanis and the clubs are known for the “Kiwanis doll.”

The club is a wonderful introduction to the concepts of service and giving back.   During the meeting, Superintendent Brian Monahan said the K-Kids members often become members of the Builders Club at the middle school and Key Club at the high school.

“They teach our students the importance and value of community service,” he added. “We are proud to have them teaching and leading our students. We look forward to many more years with our club and its incredible leaders.”

The club has also won several international awards as well.