It’s not often too often that the Orange County executive visits the Minisink Valley School District to meet with students. 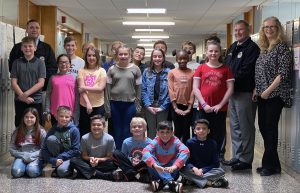 But, as a connection to Veterans Day, County Executive Steve Neuhaus’ recent visit to fifth-grade teacher Rosemay Marcolina’s class allowed students to learn more about what it means to serve in the military. He brought Emergency Management Deputy Commissioner Alan Mack with him to talk about their military experiences.

Plus, to the happy surprise of everyone, Mr. Neuhaus honored Mrs.  Marcolina — who has taught fifth-grade for 34 years — for her support of veterans and commitment to teaching her students about the men and women who serve this country as well as her dedication to her profession by naming her the Orange County Citizen of the Month for November. 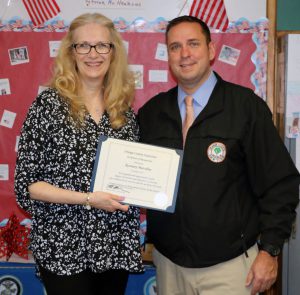 “Respecting our military is something that Mrs. Marcolina cares deeply about and I feel is very important,” the county executive said. “Not only has she taught her students about veterans, but Rosemary has provided them with unique opportunities to meet these men and women and hear their stories. It is an invaluable education tool for her students, and I know that they have benefited from these experiences. Mrs. Marcolina is an asset to Minisink Valley, and it’s a privilege to honor her.”

Lessons about civics prepare students for the veterans’ visit

As part of the preparation for the visit by Mr. Neuhaus and Mr. Mack, the class studied the U.S. Constitution, Bill of Rights and the Constitution’s 27 amendments. Some students chose to memorize the Preamble to the Constitution.

Additionally, each student chose one amendment to write about and illustrate in addition to writing an essay about the meaning of Veterans Day. There were displays of students’ personal messages for the veterans, essays and drawings about the history of the Star Spangled Banner, cards, letters, drawings and gifts for each veteran in addition to a  photo album assembled for each veteran.

When the veterans arrived, students led the Pledge of Allegiance, recited the Preamble, listened to the stories told by Mr. Neuhaus and Mr. Mack, asked questions, presented gifts and shared refreshments and continued conversations, photo opportunities and handshakes. 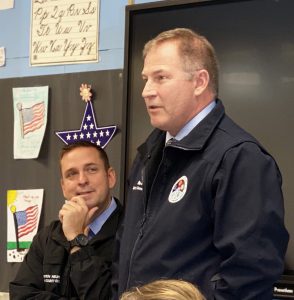 Mr. Mack served in the U.S. Army for 35 years as a helicopter pilot. He served several tours in Iraq and Afghanistan, working with Special Forces and other elite units, including Delta Force and the U.S. Navy’s renowned Seal Team Six.

Mr. Neuhaus returned to the U.S. from a deployment in June after being on active duty orders since November with the U.S. Navy.  He served with the Combined Joint Special Operations Task Force, spending most of his deployment in various locations throughout Iraq in Support of Operation Inherent Resolve, the U.S. Military Campaign against ISIS.

He currently serves in the U.S. Navy Reserves as a lieutenant commander, assigned to a Naval Special Operations Team.

Respect for the military

Mr. Neuhaus noted Mrs. Marcolina’s respect for the military began in high school when she watched several friends and family members serve in the Vietnam War. 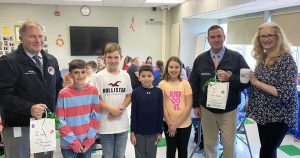 “Her appreciation for the sacrifices that servicemen and servicewoman and their families make continued when she taught in Highland Falls, located near West Point,” he said in a statement. “Soon after starting her career at Minisink Valley, Mrs. Marcolina and another teacher, Betsy Corletta, whose father served in the military, began inviting veterans to their classes around Veterans Day.”

Through the years, Mrs. Marcolina’s classes have sent packages and letters to active military overseas and to veterans’ hospitals and food pantries. Since 1994, Mrs. Marcolina’s class has invited local veterans and their family members, and school administrators and staff to a Memorial Day classroom event, which concludes with a brunch.

Students and their families also collect food, clothing and toiletries for local veterans and for Castle Point Veterans Hospital.

“That is always my favorite day of the school year,” Mrs. Marcolina said. “I just stand back and watch the students interact with our local heroes. I’ve known some of our local American Legion and VFW members my entire life, and our connections are deeper than I can explain. Our veterans deserve our respect, consideration and gratitude.  His (Mr. Neuhaus’) enthusiasm for meeting our students and sharing his stories of brave service is much appreciated.”

See a photo gallery of the veterans’ visit on the district’s Facebook page.