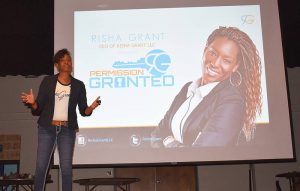 “Diversity is a journey,” Ms. Grant said. “Everybody is in a different place. You have to be open. Even though I may not identify with a group society puts me in, I need to treat that group with respect.  The only thing we can control in the world is ourselves. Everyone knows there needs to be change, but no one wants ‘to be the change.’ To recognize something you have to do is the hard part.”

Ms. Grant is the CEO and founder of Risha Grant LLC. Her firm offers communication strategies, tactics and training as a catalyst to create inclusive cultures and diverse markets.  With over 20 years of experience, she offers communities and businesses steps to identify, own and confront bias.

Inclusion, she said, is the concept of making sure everyone is “invited, involved and engaged.”

Bias is the preconceived or unreasoned feeling or emotion. 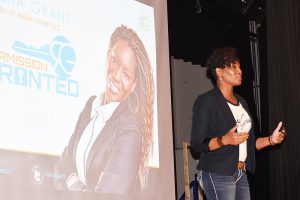 “Diversity is a fact,” said Ms. Grant. “Companies don’t have diversity problems; they have people problems. ‘We’ are the problem. We are flawed human beings.”

Ms. Grant spoke about unconscious or implicit bias — the unconscious attribution of particular qualities to a member of a certain social group — as being a part of everyone’s upbringing.

Additionally, validated bias is based upon the actual experiences that have negatively affected one’s way of thinking.

“We keep it going in our minds and it’s so deeply rooted to get rid of,” she added.

That bias synapse is so disruptive to an organization’s culture because of the tremendous negative issues that can result.  As a way to address bias, Ms. Grant offered a “3-Step Process.”

How can bias be addressed?

The first is acceptance, she explained.  Who are the people who make one feel uncomfortable and why?

The second, attribution, focuses on people asking themselves: Is the reason they’re uncomfortable their fault or the issue of others?

Identification, the third, asks people to think about whether their feelings are based on personal experiences, societal norms or deeply-rooted, long-held beliefs instilled in them as children.

“It’s simple and powerful, but it cuts deep because it requires honesty,” she said. “It might even require a little discomfort.” 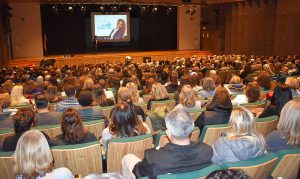 As part of this, Ms. Grant also spoke of factors which reinforce bias.

Negative personal interactions with someone can often contribute to bias.  Bias learned through one’s family is usually fear-based, generational and validated, she told the group.

People often absorb the bias of friends, which can equally come from peer pressure and also be fear-based. Media exposure and the resulting influences also impact one’s personal bias, she added.

Ms. Grant explained how, often times, people “give bias space” by being passive and saying nothing.

People also give bias space through “shame.”  Feeling guilty about one’s feelings sometimes allows people to avoid dealing with them.

There’s also people who simply accept their bias, she said, with the worst scenario being those who deny their bias.

So, how can bias be dealt with?

Ms. Grant suggested the starting point is for people is to “unpack your boxes” and look at how they deal with bias.

“Question your assumptions,” she stressed. “Challenge micro-aggressions. Build authentic relationships.  Giving yourself permission to see the humanity in others will break down hesitancy and cautiousness.  If you recognize it as something negative, how can you change that?”

It’s time, Ms. Grant equally stressed, to figure out how to respectfully deal with people.

“People are people and we all have issues and things we’re trying to get through with,” she added.  “Be intentional. If you’re not, you won’t be inclusive. We have to give grace to each other. We have to think about what we’re saying to each other.”

Last spring, the district’s administration and Board of Education reviewed all the work the district has done in prior years to address character education, which includes diversity and inclusion in the school environment.

“We looked at the programming we offered, and further refined the goals we had in place,” said Superintendent Brian Monahan. “We know we offer our students a vast array of programming tied to diversity, inclusion, kindness, hate speech and behavior expectations. They are all designed to help them be college, career and civic ready.”

Still, Mr. Monahan stressed there’s always more work to do in this area.

“And, we’re committed to doing more,” he added, “because we live in a world where there are so many outside social and societal influences on our children that go well beyond our school buildings.”