A spelling bee is a competition in which contestants are asked to spell a broad selection of words, usually with a varying degree of difficulty. The concept is thought to have originated in the United States, and spelling bee events, along with variants, are now also held in some other countries around the world.

Congratulations to the winners! 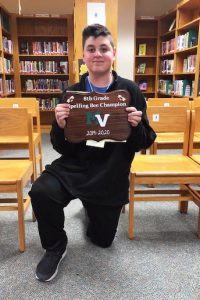 “During the spelling bee I was kind of nervous,” he said. “The more people got eliminated the more stressful it got.  Afterward I didn’t feel any stress. I feel really good about moving onto the county bee.  I didn’t think I’d move past the school level.”

Michael noted he has a “knack for big words” and felt spelling bees help students with their vocabulary. 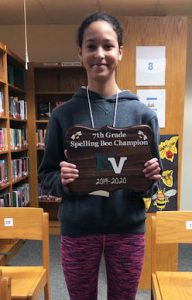 “I was nervous during the spelling bee,” she said.  “Now I am relieved and also nervous because I have to go to the county bee.”

Catherine added she felt she was a good speller because she likes to read.

“I like reading,” she added. ““Some people don’t think spelling is important because they don’t realize it can be a competition but it is part of school and it is important.” 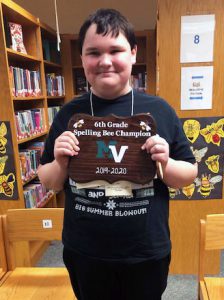 “I felt excited during the whole thing with a lot of adrenaline,” he said. “I was terrified on the last word.”

“Spelling runs in my family,” he said. “My brother won the spelling bee last year and went to the county bee.  My grandfather was a judge for spelling bees.”

He, too, felt spelling bees are important.

“Spelling is a good art to learn,” he said. “People are too used to autocorrect.  You need to spell to write a letter and letters are more heartfelt than texts.”