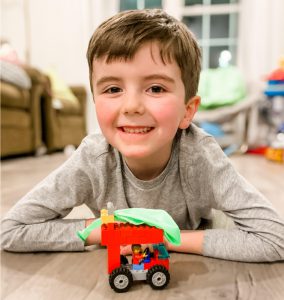 A balloon powered car is a great way to learn about kinetic energy, potential energy, conservation of energy and Newton’s Laws of Motion. 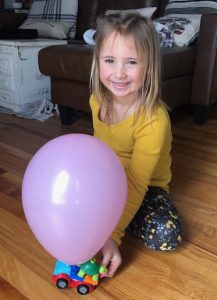 When balloon is blown up, it stores potential energy in the form of the stretched skin of the balloon and compressed air inside the balloon.

However, when you let go of the balloon, the stored energy is converted into kinetic energy as the balloon flies around (some energy is also converted to heat because of friction). The laws of conservation of energy say that energy doesn’t disappear, but changes to different forms.

The students’ balloon powered cars are great examples of Newton’s Third Law of Motion. Air is forced out of the end of the balloon, which means there must be an equal and opposite reaction pushing the car forward!

Obviously, the class discussion on the science lesson tied to their LEGO project took place in more simplistic terms.

But, they clearly understood the lesson:

“The air from the balloon came out, so that made the car move,” said Nora Walicki.

“It was so cool,” said Greyson Keppler. “We just had to attach the balloon to make the car move, not just roll it like we usually have to.”

Colin Flatley added: “There was more air in the big balloon so that one would make the car go farther.”