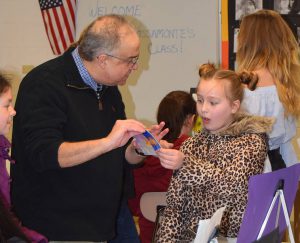 Mr. Passamonte’s students recently read “The Magic Treehouse: Dragon of the Red Dawn” and later wrote haikus, a traditional form of Japanese poetry. Haiku poems consist of three lines. The first and last lines of a Haiku have five syllables and the middle line has seven syllables. Because haikus are short poems, they are usually written about things that are recognizable to the reader.

Meanwhile, Mrs. McElroy’s drawing and painting students were learning about the ancient Japanese art of suminagashi, or “floating ink.” This is the process of marbling plain paper with water and ink to transform it into something colorful. The technique originated in Japan as early as the 12th century.

“The marbleized paper that my students created through suminagashi served as a background for them to illustrate the haikus that Mr. Passamonte’s students created,” she said. 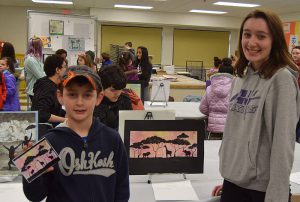 The younger students took a short field trip to the high school to meet with the art students, giving both groups the opportunity to communicate with each other and share what they learned. Plus, the third-graders had the added perk of seeing a high school classroom “in action” during their “tanoshii” or pleasant/delightful visit.

“Being able to share my art with the younger students was an amazing experience, said art student Nikki Lombardo. “It showed them that something they created could inspire someone else to create something beautiful. By working together and combining our creativity, we all learned more about Japanese culture and learned that you can inspire someone no matter what age you are.”