Joan Plummer Russell’s “Aero and Officer Mike” is a non-fiction book chronicling the partnership of Cpl. Mike Matsik and his K-9 partner, Aero.  All third-grade classes read the book, and with the officers’ visit, made real life connections.

Orange County Sheriff’s Department Sgt. Dustin Palen led the outdoor assembly to students with assistance from officers representing the City of Newburgh, Town of Wallkill, City of Middletown and Orange County Sheriff’s Department K-9 units.  Their visit reinforced the book’s content about the important link  between the human and canine officers. 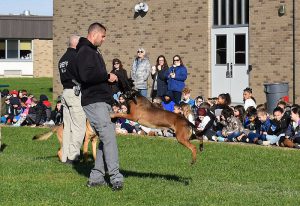 He spoke of their roles in patrolling, finding narcotics, explosive devices and even people, in addition to evidence recovery and their ability to “catch the people who don’t listen to us and try to run away.”  (Did you know a K-9 can run approximately 30 mph?)

The dogs, Sgt. Palen explained, mostly come from eastern Europe and are about 1-year-old when they are assigned to a human officer.

There’s intense and ongoing training, he told students, which includes obedience, agility and tracking training. In addition, the dogs learn verbal and non-verbal commands and more.   They typically work six to nine years before they retire from service. 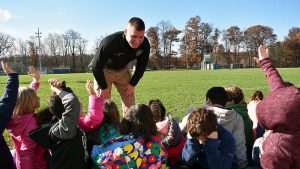 During the assembly, the human and K-9 officers demonstrated how the dogs’ intensely keen sense of smell allows them to sniff out drugs and explosives; how the faintest human scent on an object can be detected to find different items; and how a dog can outrun even the fastest criminal.

Officers later answered questions for students, telling them more about K-9 training and handling, how the dogs are cared for and even career opportunities in the general police and K-9 officer fields. 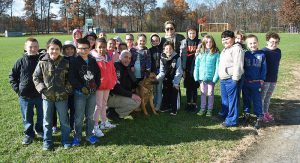 Students were delighted to have a meet-and-greet/photo opportunity with Officer Skip at the end of the presentation.