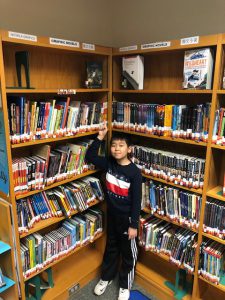 In this instance, a group of middle school students recently worked with staff to create genre labels for sections of the middle school’s library with Mandarin Chinese characters and Spanish language words.

It all started with bookmarks 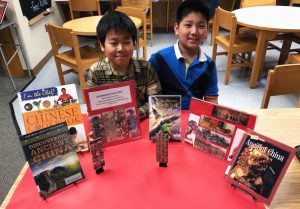 The idea began when Richard brought in Chinese bookmarks to show librarian Maggie Spicehandler. That led to a display of bookmarks, created by Richard and Jerry, which also included some of Richard’s personal Mandarin Chinese book collection and books  housed in the library.

“It’s not word-to-word translation, but the concepts that are listed,” said Mrs. Spicehandler. “The directions to check out a book in English are five steps, but are only three steps when translated into Chinese. They (the students) have been really gracious about helping to make sure the translations are correct.” 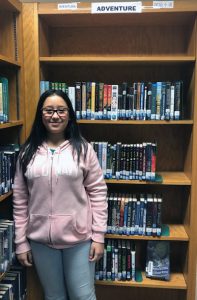 Bonus! All students can learn some new Spanish words and Chinese characters

For example, if students are looking for a graphic novel to check out, they’ll also see shelves of books labeled as novela gráfica or 图文小说.  (What’s a graphic novel?  It’s a book made up of comics content. The term  is applied broadly and includes fiction, non-fiction, and anthologized work and distinguished from the term “comic book,” which is generally used for comics periodicals.)

“There’s so many wonderful things coming from this,” said  Mrs. Spicehandler.

“They can now ‘see’ their culture and themselves represented in the library and have further ownership in the library. What’s most wonderful is that they are helping students coming in after them ‘to navigate’ the library. Now, because of them, if we have students who speak Chinese and Spanish as their primary language and want to check books out, and they can go to different sections of the library and see the genres listed in their native language.  They come up the desk and check out of a library using directions in their native language.”

She added: “I told them all: ‘You are all going to graduate from high school and these labels will be here to help other students.’ They were really happy with that.”

Principal Michael Larsen said this was a beautiful example of students helping others and further increasing awareness of the school’s cultural diversity while offering all students an opportunity to learn a few new words in two different languages.

In recognition of their efforts, the Board of Education recognized the students (and staff) with awards of excellence during its Jan. 9 meeting.

“Most importantly, this is a great representation of the important act of kindness,” Mr. Larsen said. “They wanted to help others become more comfortable in our school. What a kind thing that is.”