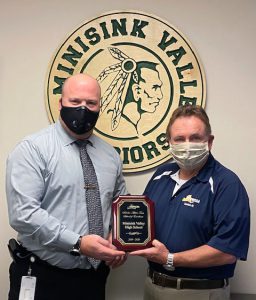 This award is presented to member schools who have at least 75 percent of their varsity teams maintaining a cumulative grade point average of 90 percent or above.

“The hard work, focus and dedication of our Warriors to their academics and athletics is a true testament of their character and determination for success,” said Athletic Director Tim Bult, when accepting the award.