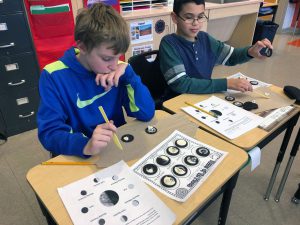 Kids will say Oreos make a great snack, but Cynthia Careccia showed her Otisville fifth-graders that Oreos also have a great role in a science lesson!

Though the moon isn’t made out of Oreos (or cheese), Mrs. Careccia recently used Oreos to teach her students about the phases of the moon during their Earth and Space science unit. 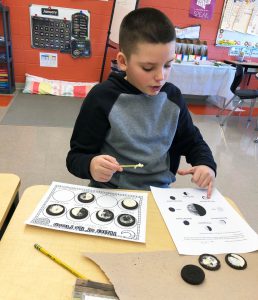 each phase using Oreos.  After matching, building and drawing out the phases, students got to eat their work, presumably to simulate a moonless night!

Students were asked if they preferred a “gibbous” Oreo (a lot of cream), a “crescent” Oreo (a little cream) or a “full moon” Oreo (a whole side of cream)

By the way: “Gibbous” refers to the shape, which is less than the full circle of a full moon, but larger than the semicircle shape of the moon at third quarter. A “crescent” moon appears early in its first quarter or late in its last quarter, when only a small arc-shaped section of the visible portion is illuminated by the sun. 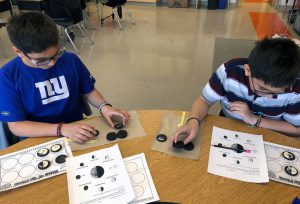 Christopher Tulp, reinforcing the vocabulary portion of the lesson.

Here’s two other fun Oreo STEM facts, according to Delish:

If you took all the Oreos ever made and lined them up end to end along the equator, the line would circle the Earth 381 times. Stacked, they would reach the moon and back more than five times.

And:  The perfection of an Oreo cookie is down to an exact science. The cookie-to-crème ratio of an original Oreo cookie is always, without fail, 71 percent to 29 percent.