The “A” in STEAM was apparent in Otisville Elementary Art Teacher Kara Welsh’s art class this week when students used a computer program to make short animations.

STEAM (Science-Technology-Engineering-Arts-Mathematics) projects like hers are commonplace in Minisink Valley classrooms.

50 pictures to make about 10 seconds of video 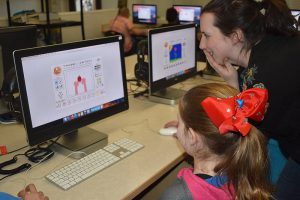 “Student animations will be about 50 frames long, and when the program flips through each still frame, it will be about 10 seconds of video,” said Mrs. Welsh. “This means they will draw 50 pictures that change just slightly each time. When the program flips through them quickly, they appear to move like a video. This is just like making a hand-held flip book, but using the computer we can use tools like copy/paste and drag/drop to make it easier.”

Using the “Animationish” software, students determined images they wanted to draw as they concurrently considered the “plot” tied to their images which would eventually result in the short video snippet.

“It’s cool how you can make it work,” said fifth-grader Erin Ruggiero. “You’re launching a video of something in transition.”

Her art focused on a picnic scenario, though she told a visitor she wasn’t quite sure what the end result would be.

“If you were to draw on paper, you couldn’t make it move,” she added. “But if you draw with a computer, you can make it move.”

A different kind of Pac-Man prowess in a classroom setting 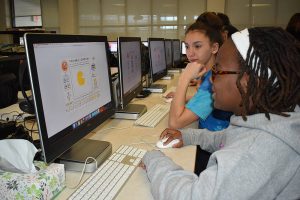 However, fifth-grader Siyassa Mathis definitely knew her artistic storyline would tie into the iconic yellow Pac-Man, who has entertained billions of gamers by gobbling up just about everything in its path since 1980.

“My working title is, ‘Pac-Man’s Life,’” she said, as she drew a ghost looking similar to what one sees in the arcade game. The ghost will presumably be eaten up by the fictional Pac-Man character she drew to replicate the one in the popular game franchise.  “I like gaming and I like to play on my computer. My project is like gaming in the classroom.”

Like Erin, Siyassa agreed the assignment takes artistic drawing to a higher level.

“It’s actually pretty fun,” she added. “We can do something different than just draw on paper.”