The halls are alive with the sounds of music at Minisink Valley schools, and often times there’s even a STEAM component to students’ melodious work. 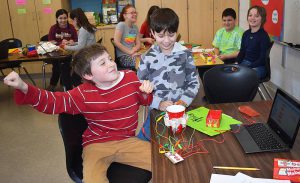 Makey Makeys are electronic invention tools and toys that allows users to connect everyday objects to computer programs. Using a circuit board, clips, and a USB Cable, the toy uses closed loop electrical signals to send the computer either a keyboard stroke or mouse click signal. This function allows the Makey Makey to work with any computer program or wepage that accepts keyboard or mouse click inputs.

In this application, the result is musical sounds.

“These devices interrupt the computer keyboard and students must make a circuit in order for their Makey Makeys in order to control their computer,” said Mrs. Fenfert. “For the first part of the unit, the students first learned how to use the Makey Makey to form circuits using conductive materials like bananas, oranges, water, Play-doh and themselves to play a pre-coded xylophone.”

They then performed xylophone compositions they composed themselves on their Makey xylophones.

Then, the lessons became even more creative using “Scratch,” a free object-oriented software development kit that allows children ages 8 to 16 to create animations, interactive stories, games and music without needing to know a specific programming language.

Building on learning with ‘Scratch’ 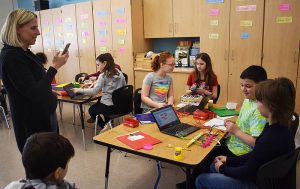 And, of course, the instrument needed to actually “play.”   As part of the class work, students presented to classmates what they created while demonstrating the invented instruments’ sounds.

To do so, they hooked them up to the Makey Makeys and “played” them.

Alexander Menchini and Nolan Mann’s instrument  was coded to play the popular “Baby Shark” song.  They chose it because they wanted to be “trendy and current” with what’s on the playlists of younger kids.

“This was creative and kind of fun because we got to learn to make our own instruments,” said Alex. “We got to work together as partners.”

Nolan agreed,  as he demonstrated his “Baby Shark” dance moves.

“We had fun making funny noises and making the sound a silly sound,” Nolan said. “I learned how to make my own instruments and even coding.” 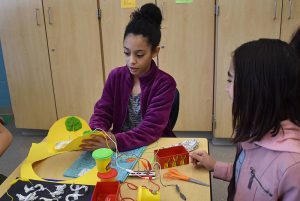 Then, there was the foodie duo of Elena Urena and Mia Romanbatista, who created a taco — yes, a taco — to play to the sounds of someone crunching on the popular Mexican fried tortilla.

Well… in truth, the taco was actually construction paper with lumps of Play-doh to simulate salsa, guacamole, meat and other fillings.

“We started thinking about an instrument using food,” said Elena.

“We thought we would do a donut,” Elena said.  “And somehow, we wound up with a taco.”

“This is what happens when you have music before lunch,” Mia acknowledged matter-of-factly.

The girls recorded themselves “making the noises we make when we eat,” according to Elena, with supplemental sounds coming from the sounds of coins dropping.

“I learned how to pull noises together to make one noise,” said Elena.

Mia equally noted they learned how to make those sounds using unexpected objects like tinfoil and construction paper.

“We are learning science mixed with music,” she added.

There was one added bonus as well.

“We’re best friends,” Mia said, “and we learned we both liked tacos and we can we can work well together.”