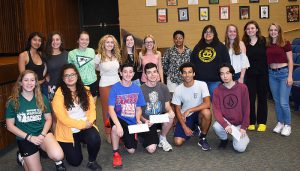 Congratulations to the 20 Minisink Valley seniors who will be awarded the Seal of Biliteracy at graduation!

This recognition seal,  which will be affixed to their diplomas, means New York State recognizes them as bi-literate. Students had to demonstrate proficiency in their native languages and the target language.  This year, recognitions in  English, Spanish, and Mandarin Chinese were awarded.  Students presented to teams of biliteracy teachers earlier this month after they had met the academic requirements.