Congratulations to three Minisink Valley seniors on the signing of their Division I/II NCAA National Letters of Intent: 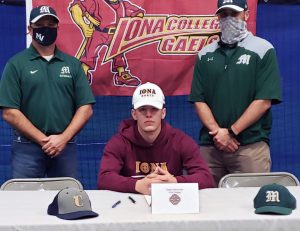 The pandemic cut Angelo’s first varsity baseball season short but that didn’t prevent him from achieving one of his goals. With 10 Division I schools in pursuit, Angelo has committed to Iona.

“Iona is the school that Angelo really wanted,” said Coach Dave Benedetto. “I think it’s a good fit for him and he will be a tremendous asset to their program. Now that the weight of choosing a college is lifted, Angelo can go out and focus on his senior season at Minisink Valley. All of his hard work, perseverance, and dedication has paid off. We are all very proud of him and his future looks extremely bright.”

Angelo, a high honor roll/honor roll student, is a FBLA member and this year’s vice president. He was a member of the Key Club in his junior and sophomore years. 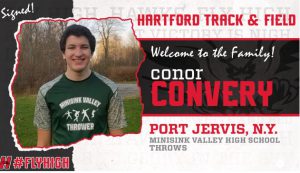 “Conor is incredibly hard working and always a great teammate to others,” said Sam Woodward, one of this coaches. “He is always willing to help out anyone during practice, especially those who are new to the sport, which is why he was recognized as one of the thrower’s captains his Sophomore year.”

Conor has had many accomplishments since joining the team his freshman year. His PR’s include: 109-8 in the discus; 50-6 in the weight throw; and 173-8 in the hammer throw.

“A few notable highlights have also been winning the State Qualifier as a sophomore in the hammer throw; and winning pre-Nationals, placing second at the Armory Youth Championship, and placing third in Divisions and Sectionals in the weight throw,” said James Beck, who also coaches him.

Megan Donnelly, the third of his coaches, added: “Had Conor been given more of a season his junior year, we know he would have accomplished much more.” 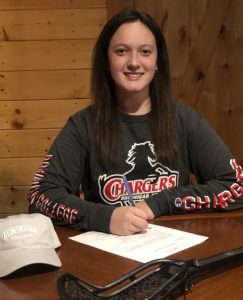 Erica has been a major contributor to Minisink Valley’s success in her in game contributions and team leadership. As one of the team’s strongest midfielders, she has tallied more than 75 goals and 30 assists. She has been recognized as a Section IX All Star, Team Captain and an MVP of the year.

“It’s been a pleasure to coach her throughout her youth and high school years and watch her develop into the player and person she is now,” said Coach Chris Burger. “We look forward to her contributions in the upcoming high school season and we know she will succeed both academically and on the field throughout her college experience.”

Erica has been on the high school’s high honor roll for four years, is a FBLA member and treasurer of the Art Club and Varsity Club.

“We know these athletes will take all their coaches taught them and represent Minisink Valley with honor at their selected colleges,” said Athletic Director Tim Bult. “We are extremely proud of their accomplishments and wish them great academic and athletic success.”

The next NCAA National Letters of Intent signing dates are: