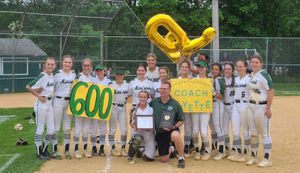 Congratulations to Minisink Valley Varsity Softball Head Coach Bruce Guyette, who earned his 600th career win on May 26 when the Warriors beat the Roosevelt High School Presidents in a 5-2 win. 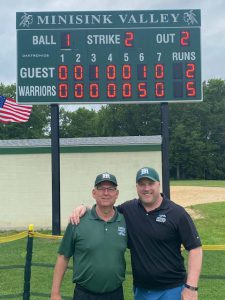 Coach Guyette was presented a commemorative plaque by Athletic Director Tim Bult to recognize this outstanding achievement, to the delight of his team and fans.

Additionally, he also was recognized on the field as the 2020-21 National Federation of High Schools (NFHS) Softball Coach of the Year, a recognition that was delayed due to COVID-19 restrictions.

Coach Guyette, who retired from Minisink as a math teacher in June 2021, has served as head coach for 36 seasons. His illustrious coaching career includes these highlights:

“Very few coaches ever attain 600 wins, it’s a true rarity,” said Mr. Bult. “Coach Guyette is one of the most respected, skilled and dedicated coaches in the Hudson Valley.  He expects excellence from his players and they deliver time and time again because of his commitment to the game and his desire for his players to be successful.  Our varsity team is a powerhouse because of his coaching, mentoring and love of the game. We’re so proud to see him reach this milestone. Not only is he a true gentleman, he’s an example for other coaches to follow.”