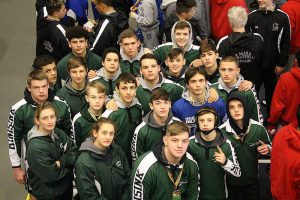 “Minisink Valley wrestled very well, but was matched up with the eventual champion very early in the tournament,” said Athletic Director Tim Bult. “Massapequa went on to win the state championship later that evening.”

Minisink Valley finished its dual meet season with a win over Middletown High School on Feb. 4 and currently has a 26-1 season record in addition to its Section IX Team Championship and its ranking as number three in New York State.

Wrestlers are now preparing for the Section IX Individual Championships, to be held Feb. 8 and 9 at Monroe-Woodbury High School.

“To finish as the third-ranked team in New York State is another amazing accomplishment for our wrestling program,” said Mr. Bult. “The work ethic our team displayed was simply outstanding. We congratulate Massapequa High School and we look forward to the Section IX Individual Championships this weekend.”