Exploring life, being creative and “reaching for the stars” are qualities Minisink Valley teachers and parents always look to instill in children, and those traits are now represented in a new vinyl mural at Minisink Valley Elementary and Intermediate schools.

Graphic artist Jon Contino, an area resident,  father of a first-grader and owner/creative director of Contino Studio in New York City, created and donated the recently installed mural in the schools’ hallway to represent those qualities.

Helping to create a new look

“Fiona told Mrs. Bobish that I was an artist, and Mrs. Bobish later asked me if I could design a class t-shirt,” he said. “When I was there one day, she showed me one of the older murals and said they had an idea to spruce it up a bit, and could I help?  I do this for a living, and I suggested that perhaps we could do a nice vinyl application. That way, going forward, we could update it with a new vinyl application every so often over the years if people wanted to keep it fresh.” 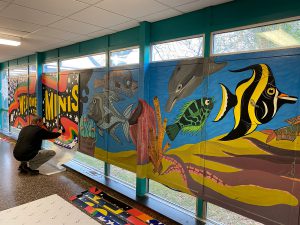 “I own a branding studio and I work with a lot of huge businesses and crazy budgets,” he said. “I do get to do a lot of cool stuff, but this was something that I felt would have meaning, particularly because my daughter is walking past it every day.  To be able to have that type of emotional connection to a place, especially a place where my two daughters will start their lives, it was just a great way to help make this their home while having others be a part of it, too.”

Stars and planets were the inspiration

During a summer beach vacation,  the family listened to a presentation about the stars and planets.

“Instead of being generic, I had an idea to do something more wild, to instill creativity and exploration, so the mural has a space theme,” he said. ” I used primary colors to keep it feeling young and it felt like it fit right with the schools.” 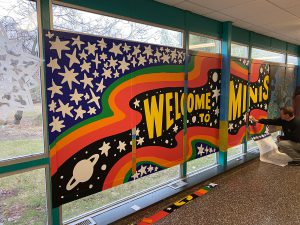 Mr. Contino  worked with Bob Booth, owner of BB Graphics in New Windsor and the father of Minisink Valley graduates, to complete the project.

“Everything was donated,”’ said Mr. Contino   “The idea was to try to do this over the past summer. All of my contacts are in the city for production, so I needed to find someone to help with the vinyl application. Bob lives down the street and I reached out to him. He printed it out and applied it for me.”

Equally important, Mr. Contino – author of the book “Brand by Hand” — takes pleasure in giving back to the community.

“I went to public schools and I know how tough it is with budgets,” he added. “When the opportunity came up to contribute something that I felt I and others can appreciate, it felt it was a rare opportunity and I wanted to give my services where I could.”