The Minisink Valley Central School District covers 115 square miles and is one of the largest school districts in the southern tier of New York State. It is located between 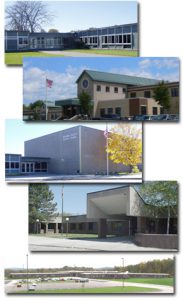 the Hudson and Delaware rivers, with New Jersey to the south and Pennsylvania to the west.

It is an area steeped in history with relatively unchanged landscapes of low mountains, hills, valleys, rolling uplands and long standing family farms. There are suburban housing clusters, single housing units and a few trailer parks. There is relatively little industry and manufacturing within the district, but there are local enterprises in each of the towns, hamlets and villages which comprise the district.

Currently, there are approximately 3,500 students enrolled at the four schools at the Route 6 campus and at Otisville Elementary School in the Town of Mount Hope. Our schools practice a child-centered philosophy designed to meet the individual needs of our students K-12. The district offers a strong academic program in its five school buildings: two elementary schools, one intermediate school, one middle school and one high school.

In keeping with our emphasis on individual needs and the development of the whole child, the educational program is supported by academic intervention services, the celebration of artistic and musical talents of children, an impressive athletic and extracurricular program and a focus on developing children ethically and emotionally as well as intellectually.

The Minisink Valley Central School District encourages all students to reach their full potential by providing equal opportunity for academic, social, physical and moral education in a safe, caring and challenging environment. In partnership with the community, we are committed to meeting and exceeding New York State Learning Standards while preparing our students to be productive, responsible citizens and life long learners.

The first schools located within what is now the Minisink Valley Central School District were small one and two room schoolhouses in local districts serving students in the immediate surrounding areas.

When New York State moved to centralize many of these smaller districts, it appeared that students in the towns of Greenville, Minisink and much of Wawayanda would be annexed to Middletown, Goshen or Port Jervis. Area residents opposed to annexation worked on an alternate plan to save their local schools, even traveling to Albany for a two day centralization study with State Education Department officials.

It appeared that 21 districts within the townships of Greenville, Minisink and Wawayanda would be involved with the vote on school centralization, but only 20 districts participated. The week before the vote, Wawayanda’s District Two consolidated with the City of Middletown.  On June 30, 1955,  residents of those 20 districts approved the centralization plan by a nearly 3-1 margin.  That night, the voters who were present when results were counted elected the first Board of Education: Greenville – Harold Geiger, Francis Remey, Robert Runnalls; Minisink – Arthur Brown, Warren Ford, Richard Hansen; Wawayanda – Richard Hall, Josephine Horan, and J.J.Schmid.

Land on the Route 6 Haakmeester farm was selected for the site of the original school building which opened in September 1958. That first building was designed to accommodate 1,000 students in Grades K-12. In the next few years additional districts from Mt. Hope, Howells, Pilgrim Corners and Mamakating joined the district.

In 1972 the Otisville School became part of Minisink Valley through a merger vote by residents of both districts. In 2008, the new Otisville Elementary School opened.

In 1955, residents of the surrounding communities voted to form the Minisink Valley Central School District. Construction of the original Minisink school building was completed in 1958. At that time, a time capsule was placed behind the cornerstone.

A re-opening of the time capsule is currently planned for 2055.