Minisink Valley Central School District > Archive > A final school year lesson: Know ‘the person’ you really are around others 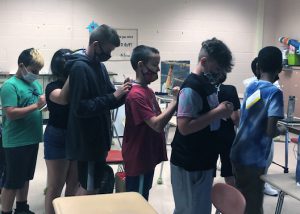 Joanna Browning’s final lesson to her sixth-graders is actually a lesson for everyone as the school year ends.

To conclude the year, Ms. Browning led them in a discussion about themselves.

“We reflected on times they have had another student or students say something to them that was unkind or hurtful,” she said. “How it made them feel. When it was. How they still can remember how awful it was. We talked about how we often remember the bad and we don’t always listen to the good or take it seriously. How good things are often forgotten but the bad leave 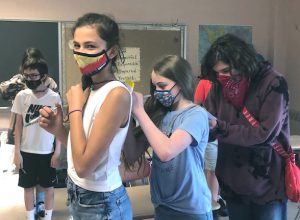 lasting impressions on us. Also, how who we are and who we become has so much to do with what others think of us and we think of ourselves.”

After an ongoing discussion, students were given a hole-punched card with a string to put around their neck. They put their name on the card turned the string around so the card would dangle from their back, so their peers could take the card and write something positive about them.

Her students walked around the room doing this until the music playing signaled them to stop and sit back down. Once seated, they were invited to turn their cards around to the front and see what their classmates really said about them “behind their backs.” 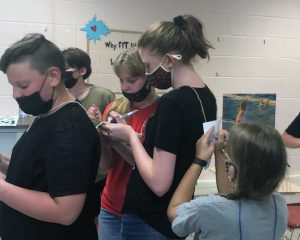 Remote students also had the chance to participate. Cards were made and mailed out to them. They were placed on a desk in the room, and in-person students commented on those cards as well.  Remote students participated via their Chromebooks.

“As the students did this, smile after smile appeared on their faces while they began to read what their classmates wrote about them,” said Ms. Browning. 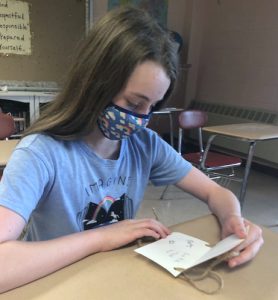 “The students mentioned they will go home and hang this on their bedroom doorknobs or dresser mirrors,” Ms. Browning said. “It was a great reminder of the person ‘they really are’ to those around them and themselves.”

Ms. Browning stressed many think learning and teaching stop when the last days before summer approach us.

“As a teacher, I want to make sure this doesn’t happen,” she added. “I want to end the year just as strong as we started.”