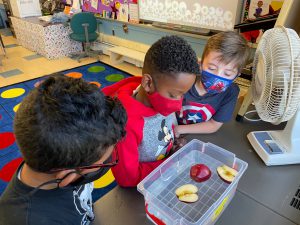 Seasonality fun in the classroom can also include the teaching of science, and is another indicator of the creativity all Minisink Valley faculty use in lesson planning.

Jennifer DiSimone’s Elementary School first-graders recently learned about “apple science,” tying in the seasonality of Hudson Valley apple picking in a lesson introducing students to the beginnings of the scientific method and physics. 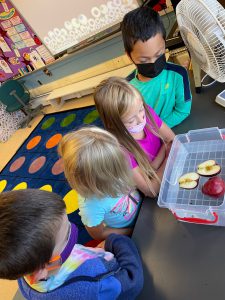 Students looked at whole apples and were asked to predict if each would sink or float.  Apples were then cut in half and students were again asked to think about what the halves might do.

Whole and half apples were placed in water and students watched to see what would happen.

After, they repeated the same discussion with apple cores and seeds, watching them intently in the water.

“We tested a whole apple, half, seeds and core,” Mrs. DiSimone said. “We made some super awesome scientific guesses and then tested them out.”

The little students were surprised to see the whole and half apples floated, while the core and seeds sank to the bottom of the container.

That’s because apples are buoyant; 25 percent of their volume is actually air. If an item is denser than water it will sink. If it’s less dense, it will float. Apples are less dense than water, so they float.

However, apple cores and seeds don’t contain the same volume of air. By testing the individual parts, students saw not all parts of apples float in water. But when all the parts are put together, they do.

Students have several years of science ahead of them before they begin calculating mass and density of objects. For now, it was a fun lesson to introduce these concepts, while aligning them to the fun fall activity of apple picking!