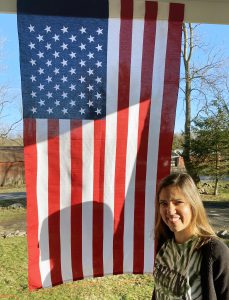 Every weekday morning at 9 a.m., Ms. Gurney will be live and lead everyone watching in the Pledge of Allegiance. Have your children, family and friends join her! This is a great way to help keep a daily school routine going!

Did you know that the pledge was first composed, with a text different from the one used at present, by Captain George Thatcher Balch, a Union Army officer during the Civil War and later a teacher of patriotism in New York City schools?

The form of the pledge used today was largely devised by Francis Bellamy in 1892, and formally adopted by Congress as the pledge in 1942. The official name of “The Pledge of Allegiance” was adopted in 1945. The most recent alteration of its wording came on Flag Day in 1954, when the words “under God” were added.