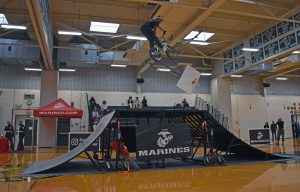 The ASA High School Tour assemblies — one each for the junior and senior classes —  was sponsored by  the U.S. Marine Corps and ASA Entertainment. 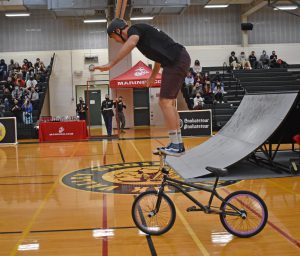 campaign for Tobacco-Free Kids, according to its website, www.asahighschooltour.com. It features some of the world’s top professional skateboarders, inline skaters and  X Games’ BMX riders who perform while an educational message is presented “in a fun, positive and interactive fashion.”

At Minisink Valley, BMX bikers performed amazing tricks that sent them high in the air, wowing students, faculty and administrators. 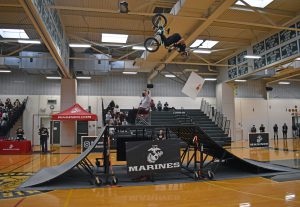 The Senior Class assembly featured a special encore trick which included Principal Ken Hauck’s participation. Mr. Hauck sat on the top of the platform in a chair, arms raised in the air,  while a BMX biker raced up the ramp and flipped over him in mid-air, to the delight and cheers of students

But an important message was stressed among “cool factor” of BMX action sports.

Master of Ceremony Dana Sieg reminded students that any type of bullying is unacceptable, stressing bullying comes in many forms: physical, verbal, psychological and cyber.

“It’s easy to get behind a computer and talk trash about someone,” he said, 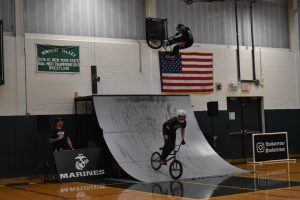 cautioning students to be mindful of the negative consequences of cyberbullying. “But remember, someone on the ‘other side’ reads it. And that’s a big deal to people when it impacts that person negatively. Don’t do it.”

He also reminded students that if they ever experience any type of bullying, their teachers and administrators are prepared to help them stop this.

“They love and care about you more than you will ever realize,” he said. 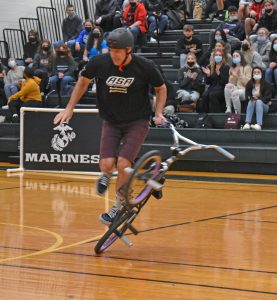 Mr. Sieg also told students they should never stray from following their life’s dreams and passions, because that will keep them “in a positive place and help block out the negativity” of anyone trying to discourage them.

He singled out BMX rider Zack Newman and as example, explaining that as a child, Mr. Newman wanted to take part in the sport. His mother was only able to afford used equipment: A pink helmet, leopard print knee pads and an oversized bike.

At the park, older kids made fun of him and harassed him to a point that he almost quit.

But after pep talks from his mother, he decided to stick with it and “put in the 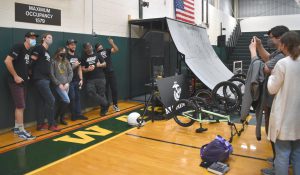 dedication, perseverance and drive, not giving up,” according to Mr. Sieg.

He efforts paid off: In addition to being a part of the ASA High School Tour, Mr. Newman  won the bronze medal in BMX Vert at X Games Minneapolis 2018!