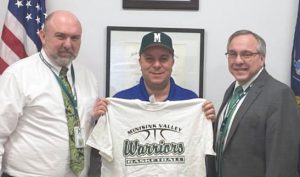 District officials met with 98th District Assemblyman Karl Brabenec on Feb. 20 to reinforce the need for Minisink Valley to get its fair share of state aid,  as state officials continue to work on finalizing the state’s budget.

“Assembly Brabenec is committed to helping Minisink Valley and we appreciate his determination to help his Minisink Valley School District constituents,” said Mr. Monahan. “He is working to arrange a meeting with all four of our state representatives so we can continue this important conversation and we are grateful for his help.”

A meeting with 100th District Assemblywoman Aileen Gunther has been scheduled.