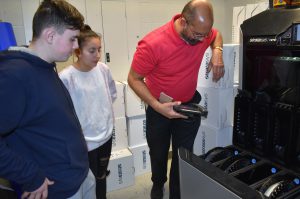 Working collaboratively happens every day in the Minisink Valley School District, with the latest example being a three-way effort between middle school students, faculty and administration to support the district’s newly installed VoIP telephone system.

Plus, having an academic Science-Technology-Engineering-Mathematics (STEM) component to those collaborative efforts made this opportunity even more worthwhile.

Last spring, Minisink Valley received approval to begin work submitted for consideration in May 2017 under the Smart Schools grant program. The Smart Schools Bond Act, approved by New York State voters in 2014, authorized the issuance of $2 billion of general obligation bonds to finance improved educational technology and infrastructure to improve learning and opportunity for students throughout the state.

As part of this state-funded program, the district had the opportunity to undertake a complete replacement of its current and antiquated telephone system with a state-of- the-art “Voice over Internet Protocol” (VoIP) telephone system.

Over the past several months, contractors and the Minisink Valley technology team worked after school hours to upgrade the district’s telephone infrastructure.  During the week of Jan. 20, the new system went live. 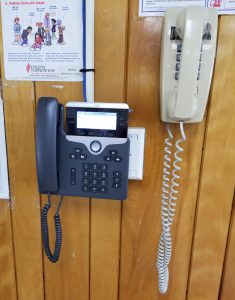 The vast majority of the telephones were desk units.   By not running new wiring into the classrooms, the district saved a significant amount of grant’s funding, allowing it to reserve grant funding, which the district intends to earmark to complete other district technology initiatives.

However, some were in locations, like gymnasiums, where only wall units would suffice. Additional new wiring and materials were still needed for the wall units, and there was a cost tied to that added work and materials.

But an idea from Network Analyst Ryan Veety cut nearly 90 percent of that cost while giving students an opportunity to see 3D printing technology in action in a real life application.

“Mr. Veety emailed us a schematic of a phone mount he was convinced could be created by students in Jon Clemmons’ technology class,” said Assistant Superintendent for Curriculum and Instruction Christian Ranaudo. “He said to me, ‘Let’s let them try this.’ When we took a closer look, we agreed this was a great idea to explore. I spoke with Mr. Larsen at the middle school and he spoke with Mr. Clemmons. We asked if one or two prototypes could be created.”

A collaborative opportunity was also a teachable moment 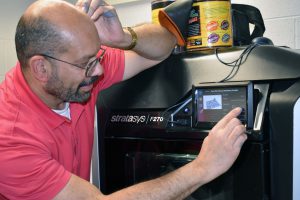 Mr. Clemmons jumped on the idea, and found some additional diagrams on Thinginverse.com, a community and design sharing platform where over 1.6 million 3D printable designs exist. It offers visitors a chance to see how others print, remix and use those plans. Within those designs were other diagrams for phone mounts.

“I ran with this,” he said, noting a completed 3D project is one of three requirements of his quarterly Technology class.  “It was a great opportunity for our students.” 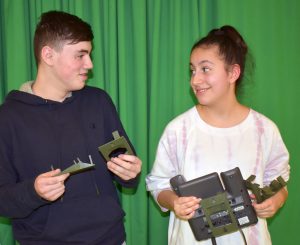 Eighth-graders Liam Holmes and Izabel Olivera were asked to be involved.

“They were already working with 3D,” he said. “They’re hard workers, I’m always seeing them busy at work. They have the prerequisite knowledge base for this. I didn’t have to worry about them getting this project done.”

The prototypes required their ability to operate the class’ 3D printer, understand how it’s programmed along with the ability to do the necessary math calculations.

The solution offered many benefits 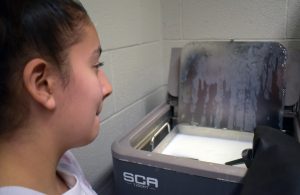 “I thought this was a good third, 3D project,” said Izabel. “We’re learning how to build more than just a simple project. I also learned more math. And, we’ll be able to help the school save some money.”

Liam agreed, adding: “I’ve learned how to use all this stuff. It’s good to know we’ve helped save some money for the school.”

Mr. Clemmons stressed there was an additional, important purpose.

“My goal for all my students is for them to be successful at something,“ he said. “To know they are capable of that success, that will translate into something very positive in their lives.”