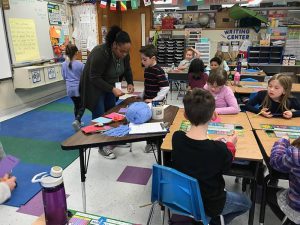 Dr. Martin Luther King Jr.’s important legacy was again highlighted this past week to Minisink Valley students as part of ongoing reinforcement and recognition of Dr. King’s essential place in U.S. and global history, as the civil rights leader’s birthday is marked on Monday’s national holiday.

“This upcoming Monday is more than a day off from school,” Minisink Valley Middle School Principal Michael Larsen told students in a special morning announcement on Jan. 18. “Dr. King was the most important voice of the American civil rights movement, and he worked for equal rights for all.  He was famous for using non-violent ways to overcome injustice, and he worked tirelessly to end segregation laws. On Monday, please remember that Dr. King dedicated his life to ensuring that others were treated fairly, respectfully and with dignity.  These are things important to all of us.  You all know that our school has dedicated this school year to ‘Choosing Kindness.’  Dr. King is a shining example to us all about the importance of choosing kindness.”

Within the middle school, as an example, Stephanie Gage’s ELA classes were among the many classes incorporating Dr. King’s teachings into school work. 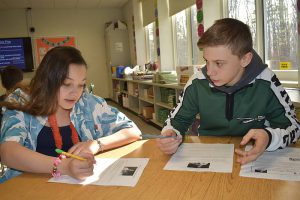 Ms. Gage’s students reviewed an analysis sheet from his “I Have a Dream” speech.  Afterward, they worked in pairs to interpret four different quotes by Dr. King and discussed their ideas as a class.  Later, students worked individually to write a paragraph that focused on one of those quotes. That assignment included their interpretation, plus they were tasked with applying it to their own lives or humanity.

One of those quotes was: “Our lives begin to end the day we become silent about things that matter.”

“That means if we don’t say anything, they could get worse or stay the same,” said seventh-grader Amanda Mastrandrea.

“Treat everyone the same,” said Amanda. “You shouldn’t judge people on things they can’t change, like the color of their skin.”

“Don’t judge people because of their race or ethnicity,” Luke said. “Everyone is a human.”

In his written assignment handed in the next day, student Clayton Duryea focused on Dr. King’s quote “Returning violence for violence multiplies violence, adding deeper darkness to a night already devoid of stars…hate cannot drive out hate: only love can do that.”

‘We are more alike than different…’

“I think that means that when faced with anger and hate you should overcome and treat them with respect,” he wrote. “If humans would stop fighting for just one minute we would find out that we are more alike than different, and the things we dislike about each other are most likely just things we fear.”

Many Minisink Valley High School classes also focused on discussions about the “I Have a Dream Speech.”

In Leiny Valet’s English 9 class, for example, she used Dr. King’s quote, “Freedom is never voluntarily given by the oppressor, it must be demanded by the oppressed” as a basis for discussion. She asked students to focus on these discussion questions: In what ways do individuals persevere against systems of oppression? How does one’s identity contribute to the power they hold in society?

Discussion on poetry and song lyrics tied to oppression

As part of that, she blended in poetry authored by Jimmy Santiago Baca, Langston Hughes and Maya Angelou — which focused on oppression — and asked them to interpret their writings to determine the poems’ overall message.  She also included lyrics from singer-songwriter Ben Harper as part of that discussion. All this was tied to the lessons of “To Kill a Mockingbird,” the book students were currently reading. 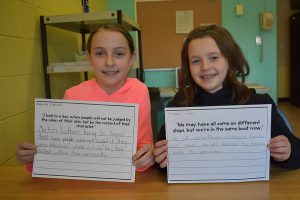 Fourth-graders, as an example, were asked to also provide their interpretations of quotes from the “I Have a Dream Speech.”  They equally spoke about their thoughts on Dr. King as a civil rights leader.

“I thought it was really cool what he did for America,” said Dempsey DePuy.  “He helped segregation to stop.”

Kendall Nixon added: “It makes me thankful that he stood up for everybody and tried to bring everybody together. People should think about what he did. He tried to change the world for the better.”

Joe Uhrig agreed with Kendall, noting: “I think people should think about that it doesn’t matter what color you are. It matters how you are on the inside. And, be kind to people.”

‘Your skin color doesn’t matter. It matters how you act, and how you live’

“He basically told everyone that we are equal,” he said. “Even though we’re different on the outside, we’re all the same on the inside. There are people who still think that white people are the better race. It’s not true. They should think about that we are all equal. Your skin color doesn’t matter. It matters how you act, and how you live.” 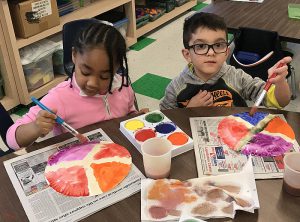 Even the youngest Minisink Valley students discussed Dr. King’s teachings in a variety of ways.

“Martin Luther King Jr. events have been, as always, very inspiring and intriguing,” said Minisink Valley Elementary School Principal Colleen Fitzgerald. “They have run the gamut of reading a biography of Dr. King and discussing the many things that he accomplished, to watching ‘Kid President’ and having discussions as well as making peace headbands.”

Thinking and absorbing for younger students

One class, she said, read “Martin’s Big Words,” and used it as a discussion. Each day during the week the class used one of his sentences as one of their mentor sentences in ELA which gave students time to think and absorb the meaning.

“They discussed the positive changes Dr. King made in our world and then drew pictures of themselves showing kindness to others,” she said.

As other examples, a second-grade class read about Dr. King and then talked about his speech.

“They talked about his dream for our world,” said Ms. Fitzgerald, “The class then discussed their dreams and hopes for the world. Each student made a square with their ‘dream’ on it and they were then all put together in the form of a ‘dream quilt.’”

Other activities used Dr. King and Rosa Parks trading cards, which include information about their lives in addition to photos, as the basis for classwork.  Students compared the facts on the two cards and later  created a timeline or a Venn diagram.

In social studies classes, students researched a “person of peace,” wrote a report about that person and made peace signs. They also gained fluency practice by reading parts of his speech.

Like its sister buildings, Otisville students were also involved in a variety of read “alouds” and “I Have a Dream” speech/writing activities.

“Dr. King’s legacy is important and our teachers have always found many creative ways to reinforce that in their lesson planning and classwork,” Mr. Biele added.