Middle School teacher Ellen Ferrier and Otisville Elementary first-grade teacher Karen Krogslund were recently honored by the Mid-Hudson School Study Council for their work to support the academic achievements and successes of their students. 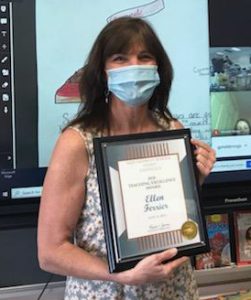 Mrs. Ferrier was named a recipient of the 2021 Award for Teacher Excellence.

Mrs. Ferrier has been teaching for 31 years and has been a tremendous asset to the district.

“Ellen is retiring at the end of the 2020-21 school year, yet continues to improve her craft daily and will be leaving at the top of her game,” wrote Middle School Principal Michael Larsen in his nomination letter. “She is an exceptional teacher and leader in our school community. She builds positive relationships with students and their families and demands the very best out of herself and her students Throughout her career, she has supported both her colleagues and students with no desire for recognition.”

He added:  “Ellen has a wonderful rapport with people of all ages, especially middle school children. Her positive attitude is contagious among her students and her peers. Ellen’s ability to connect with her students inspires them to put their very best efforts into all their assignments. She shows a high regard and level of respect for all and makes those around her better.” 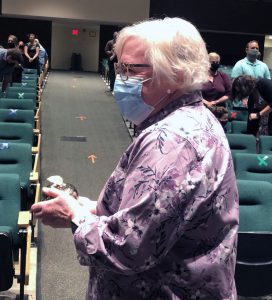 Mrs. Krogslund was named the  recipient of the 2021 Golden Apple Award

Mrs. Krogslund began her teaching career in 1971, right out of college, as a kindergarten teacher with the former Otisville School District, before it became part of the Minisink Valley Central School District.

Since that time, she has taught second-grade and is currently a first-grade teacher at Otisville Elementary. During her 50-year career, she has provided innovative and creative instruction and guidance to nearly 1,000 students, many who have remained living in the greater Minisink Valley community.

“Mrs. Krogslund’s teaching career with one employer is a rarity,” wrote Superintendent Brian Monahan in his nomination letter. “ But what’s equally rare is that she’s had the unique distinction of teaching many children and grandchildren of some of her very first students.”

When sitting down with her, Mrs. Krogslund will be quick to tell anecdotes about her former students, recalling family connections in the community, sibling connections to her classes and important relationships with her colleagues. All remain very significant to her as she recalls her career choice was always to be a teacher.

The recognition awards were announced during a recent Board of Education meeting.