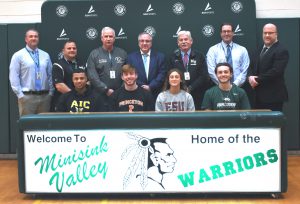 Congratulations to four Minisink Valley seniors on the signing of their Division I/II NCAA National Letters of Intent: 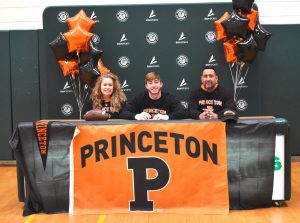 “Kai Colon may be the best leader I have ever coached in my 35 plus years of coaching,” said Head Coach Kevin Gallagher. ” Kai has all of the tools to make it at the Division I Level and that includes the athleticism, arm strength, intelligence, and leadership. When Kai came back to Minisink Valley I knew we had a very good chance to win the Section IX title. Kai brought the attitude and atmosphere of a champion. Kai also brought the belief in himself and our team that rubbed off on everyone around.”

Kai’s numerous awards include: Varsity845 First Team, All- State Second Team and  the 2022 New York State  Class A Scholar- Athlete of the Year.

At Princeton, Kai will major in finance. 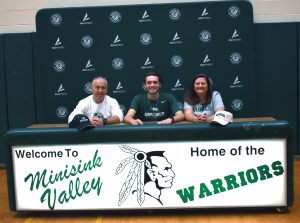 “Jack has achieved so much in his swimming career at Minisink,” said Head Coach Samantha Woodward. “He worked incredibly hard at practice year after year and it has certainly paid off.”

Jack served a swim captain in his junior and senior season,  breaking Minisink’s 200 IM school record and qualifying for States in his senior season. Jack is the recipient of  the Section IX Sportsmanship Award.

Jack will major in business at Wagner. 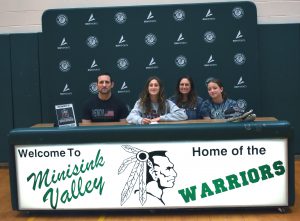 “Sofia has changed girls wrestling in Section IX and the State of New York,” said Head Coach Kevin Gallagher. “Sofia was the first female wrestler to ever place in the Division I, Section IX Tournament when she placed 3rd as a freshman. She missed most of her sophomore year with an injury and then COVID-19 took her junior year. But, Sofia placed second in the Section IX Tournament as a senior.”

Sofia is also a three-time Fargo All-American and placed fifth in the World Team Trials.  She’s also won four national titles and is currently ranked first in the nation at 122 lbs.

At ESU, Sofia will major in marketing with a nutrition minor. 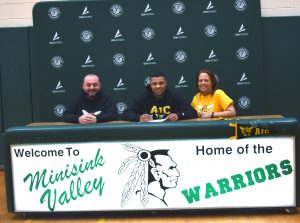 “Tyler has always been one of the best athletes on the field,” said Head Coach Kevin Gallagher. “It’s been a pleasure coaching ‘TMack’ over the years and knowing he will come up with a big sack or a big catch when the team needed it most.  The Yellow Jackets are getting a great all around player that is a playmaker on both sides of the ball. The AIC coaching staff said they are excited to get ‘TMack’ and plan on using him on the offensive side of the ball.”

“TMack” is a two year All-Section player, Varsity 845 First Team member. and an All-State player as a senior.

Tyler will major in business and marketing at AIS.

At the signing ceremony, Director of Athletics Tim Bult stressed the significance of these students’ accomplishments.

“We have over 1,200 students involved in our athletic program,” he said. “For the four of you to be recognized by these schools with a Division I or II offer is a testament to your athletic ability and your commitment to your sport.  We know you’re going to do great things, and we are so thrilled that we can say all of it began at Minisink Valley.”