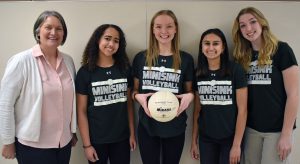 Athletes are selected based on the sportsmanship displayed during the season; the individual’s athleticism and knowledge of the sport; and the athlete’s contribution to the team’s success.

Head Coach Ellen Lain praised the honorees for their work ethic and dedication to the team’s success:

“Abby is a setter on the team and a third year starter. Her ability to set the ball perfectly to the attackers on the team enabled the team to run an efficient offense. Abby also contributed to the team with her outstanding serving and served for more points than any other player in the matches this past year.”

“Katelyn, this year’s captain, was a setter and right side attacker this season. Throughout the season, the team’s offensive system changed due to injuries and illness. Katelyn was able to adapt to the changes in her role on the team and she led the team’s offense in multiple offensive systems. Her athleticism and leadership turned the tide for the team in many of the matches.”

“Kylie is a right side attacker on the team and a second year starter. She’s a standout on the volleyball court; her ability to hit the ball with great force was a large component of the team’s offense. Kylie also improved her blocking ability throughout the season. In many matches this season, Kylie was able to shut down the other team’s offense with her blocking.”

“Hana plays in the libero position on the team. This means that she is a back row defensive specialist. Hana’s impeccable ball-control skills enabled her to pass hard driven serves and attacks to our team’s setters. Hana is a student of the game. Her ability to pass improved with every match during the season.”