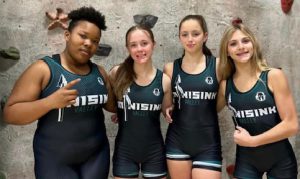 Good luck and best wishes to the four members of the Varsity Wrestling team who have been invited to participate in the inaugural NYSPHSAA Girls Wrestling Invitational in Syracuse, which takes place on Friday, Jan. 27 at the SRC Arena at Onondaga Community College.

“We’re thrilled to see these Warriors represent Minisink Valley in this upcoming tournament, “ said Athletic Director Tim Bult. “Warrior wrestling is a power to be reckoned with and these young women will compete with

confidence, grit, resilience, mental toughness, self-esteem, self-reliance and discipline. Their strength and endurance will be evident on the mat.”

This is the first girls’ tournament that the New York State Public High School Athletic Association (NYSPHSAA) has sponsored, with over 200 girls participating.

This school year, girls’ wrestling has been sanctioned by the NYSPHSAA as an “emerging sport” for the state, although Minisink Valley’s varsity wrestling team is a mixed team. “Emerging sport” status means a sports committee can be established and an event may be developed.

The tournament will have a 16-person bracket and will be run on eight mats. It will be held one day before the 2023 Dual Meet Championships at the same venue.