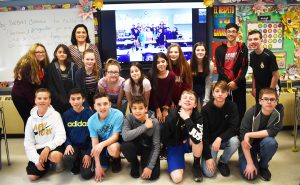 The two teachers are amigas mejores, Ms. Mazariegos said, and both felt the video meeting was an opportunity to make an interstate connection with their students. 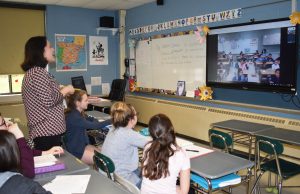 Ms. Mazariegos’ students had been learning about Cinco de Mayo (the fifth of May), the anniversary of the Battle of Puebla, a holiday celebrated in parts of Mexico and the United States in honor of a military victory in 1862 over Napoleon’s French forces.

“It was a cultural lesson but it was also a history lesson,” said Ms. Mazariegos. “My students have been learning about Cinco de Mayo, the reasons why it is celebrated, the history behind the ‘Battle of Puebla,’ who celebrates Cinco de Mayo, and the strong connection to the United States. I wanted the students to practice their Spanish and to ask questions about the Mexican culture. Technology was definitely going to be the only way we could do it.”

Students learned from Mrs. Willard and her fourth-graders — who because of where they live are already bilingual — that Cinco de Mayo within the U.S. tends to be a day Americans have popularized as one for parties featuring Mexican cuisine.  It’s not a day of significance for them. 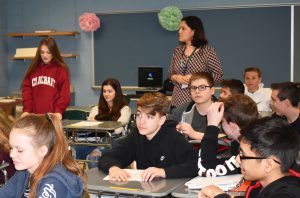 Ms. Mazariegos’ students asked their preguntas en Español to practice speaking with others outside the classroom.

The younger Texas students also told them that a more popular celebration in their part of the country is “Day of the Child,” which is actually a week-long celebration in many schools.  Additionally, they told their new eighth-grade friends, enchiladas, tostadas and quesadillas are popular food choices, in addition to tacos — which are often served for breakfast.

And, Texas is big…and hot, with regular summer temperatures as high as 110 degrees. 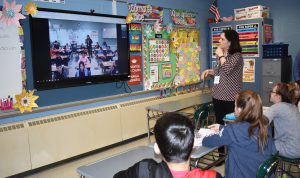 “I wanted to do a cultural lesson with Mrs. Willard’s class in which the students were active  participants in the whole lesson,” said Ms. Mazariegos. “This lesson just seemed right because my students have done so much research on Cinco de Mayo and the history of Mexico. Once they did the research, they were curious about how kids in Mexico and Texas celebrated this day. They wanted to know more about the Mexican culture, food and traditions. It was nice to see my students practice using their Spanish when they asked questions. They aren’t afraid to speak Spanish and that’s the first step to becoming a fluent speaker.”

Students, like Joe Copeland, felt they learned something new.

“Texas is a very different state,” he said. “It’s a lot hotter, too. And they celebrate Cinco de Mayo much differently than we do.”

“I learned about another culture,” she said. “We talked to each other to see how they do things.”

She added in Spanish: “Los estudiantes de Texas no celebran como yo pensé.”