Love is in the air, including in Kimberly Jordan’s College Biology 102 class, where students took their studies on evolution and applied an artistic “valentine” twist!

The class’ recent “Valentines for Species” project tasked them with researching a species found on the Galapagos Islands and later creating a valentine for that species. 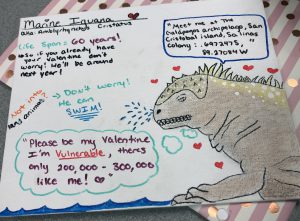 The Galapagos Islands is a volcanic archipelago in the Pacific Ocean and considered one of the world’s foremost destinations for wildlife-viewing. A province of Ecuador, it lies about 1,000 km off its coast. Its isolated terrain shelters a diversity of plant and animal species, many found nowhere else. Charles Darwin visited in 1835, and his observation of Galapagos’ species later inspired his theory of evolution.

The assignment was a perfect blend of science, art and seasonality!