The weekend conference gave students an opportunity to gather for learning and peer interaction.  They attended workshops presented by well-known and respected artists in the Broadway theatre community, including: lighting designer Ken Posner; Patti Murin, the originator of the role of Princess Anna in Disney’s “Frozen”; and actor/playwright, John Cariani; with the keynote address presented by stage, film and television actor David Harbour.

Minisink Valley alumnus is a presenter

Minisink Valley Alumnus Evan Adamson even led a workshop on set design. With over 20 years working in the industry on over 100 productions, he’s collaborated with design teams for numerous Broadway productions, including: “Matilda,” (which won a Tony Award in 2013 for set design) “Hello, Dolly” and “The Iceman Cometh” among others. Mr. Adamson also contributed to the Emmy Award nominated 2014 Sochi Olympic Games Opening Ceremony.

What did students think? 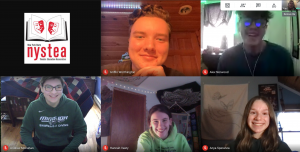 “My favorite part was the first activity time where we did an open mic type thing,” said sophomore Grace Fang. “I performed and everyone was so accepting and kind. It felt like a very safe space even though we were virtual.”

Junior Andrew Monahan said: “The conference had really brought to my attention a lot of the things that go on behind the scenes such as stage managing, installation of light fixtures and the scene design process.”

“I’m sure the experience I got was only a quarter of what it would be like in person, so now I’m extremely excited for next year when things are (hopefully) more normal,” said sophomore Alex Norwood. “Each workshop was so thorough and educational while also being fun and interesting at the same time. ”

“My favorite parts were learning from Patti Murin and learning more about auditions whether it’s for college or professional work,” sophomore Anya Speranza said.

“My favorite part was the stage management workshop I attended,” Junior Hanna Veety added. “It taught me so much about not only stage work but also leadership in general and how to be a leader in the world.”

“It was a fantastic conference with so many great panelists and teachers attending,” said junior Griffin Worthington. “I had an amazing time seeing fellow theatre people. It was awesome to be amongst others with common likes even if it was over a screen.”

NYSTEA is a statewide organization of theatre educators, that promotes and supports theatre education for students in grades pre-K through 12.  NYSTEA believes theatre is an essential component of a pre-K-12 education for all students and helps develop abilities needed for the 21st century including critical thinking, problem solving skills, applications of technology, social responsibility and creativity.

The organization also provides resources to educators teaching theatre in the classroom, directing school drama and musical presentations and hosts professional learning opportunities throughout the year.