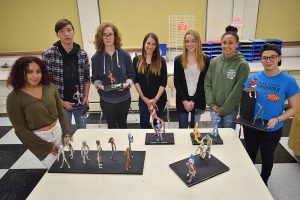 Among trends in education, two are drawing increasing attention: personalized instruction that encourages student choice and voice, and social and emotional learning (SEL).

Artistic expression creates opportunities for both. It invites inquiry and voice around topics of interest to the students, and it encourages the development of SEL skills, such as self and social awareness.

In Cayla Tangney’s sculpture class, students created small, sculpted human figures to express their voice on social issues they connected to emotionally and chose to explore.

They began by viewing and critiquing the work of Jean-François Glabik, a modern sculpture artist and painter best known for his wire and paper sculptures. Glabik’s work tells stories of the human experience and echoes issues of social justice. For added inspiration, students watched a video that posed the question, “What can I do, what can I contribute?”

After brainstorming topics as a class, students chose one that meant something to them. Following a sketch of their sculpture concept, they created wire armatures for their figures and built on them with plaster and paper.

Alia Castro, a senior, decided on a representation of racial issues. Eight figures symbolizing different races stand across a long black board. Some are looking out, standing apart from the others. At the center, a group is coming together and facing each other. “This is how it should be,” Alia said, explaining the meaning of the figures coming together. “Racial differences and racial conflict can be overcome when people are open to getting to know each other,” Alia said.

Junior Madison Kipp chose to express her feelings on the plight of refugees and asylum seekers. Two of her four figures are wrapped in world maps symbolizing people from around the world. But they are also two parents watching their child being taken away from them. She titled her piece, “Zero Tolerance, Zero Compassion.”

Junior Noah Saunder’s single figure represents the issue of mental illness and the social stigma that may keep people from seeking life-saving help. The piece is titled, “Why me?” and a question mark stands in place of the figure’s head. Peeping from under the figure’s outer layer are cut outs of printed words and phrases. Some are distressing, and some are hopeful: “finding meaning, finding help.”

Kelsey Harrison, a senior, chose to represent the coexistence of diversity and intolerance in American society. “We are made up of many races, but we remain separate instead of coming together,” Kelsey said. Her figure stands on a map of the United States divided in three colors. The figure itself bears a variety of skin tones and its crossed arms represent the “embracing of diversity,” which is the title of Kelsey’s work.

Senior Kaela Baranowski created an awareness piece about mental illness. A figure sitting atop  a tall structure represents a section of society that doesn’t take mental illness seriously and blames those affected. The figure at the base of the piece symbolizes those who live with mental illness every day. “This is serious, and we need to stop treating it like it’s nothing,” Kaela said about her yet unnamed piece.

Nicole Cangialosi created the piece “All I see are negatives,” depicting two figures standing on opposite sides of a see-through surface. It symbolizes the social pressures and expectations around body image that can result in a negative sense of self.

“Their work is really thoughtful and powerful,” said art teacher Cayla Tangney. “They really got into it and made it personal.”