For the first time in many years, the Minisink Valley School District is sending an Odyssey of the Mind (OM) team to the New York State OM Championships at Binghamton University, following the Intermediate School team’s first place win in its division at the March 9 Region 5 competition held at Orange-Ulster BOCES.

State competition is March 23, and the winning teams will advance to world finals to be held at Michigan State University in East Lansing in late May.

‘OMER to the Rescue, Again‘

The team of Faith Padavano, Sylvia Glebocki, Olivia Pollock, Samuel Blake, Samantha Kastle, Luciano Palacios and Fiona Talbot scored 320.37 out of a possible 350 points to capture first place for its Division I presentation of Problem 1: “OMER to the Rescue, Again.” 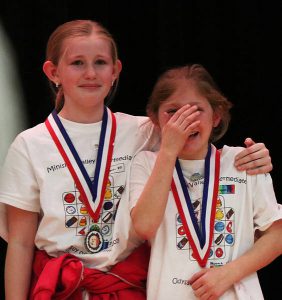 For this problem, OMER, OM’s “raccoon mascot,” and his sidekick traveled to different places with suitcases holding all parts of an OMER-mobile vehicle. Both assembled and rode on the vehicle, which needed to function in different ways, “to save the day.”

Between attempts, the vehicle was disassembled, put back into the suitcases, and taken to a different area where it was reassembled and driven again. Finally, the OMER-mobile was thrown a hero’s parade as a show of appreciation.

The team said they can’t get into more specifics about their eight-minute presentation or reveal the props used to ensure they follow OM rules. 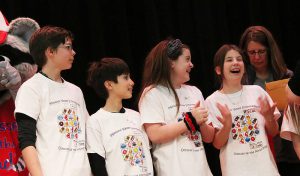 OM is an international educational program that provides creative problem-solving opportunities for students from kindergarten through college. Team members apply their creativity to solve problems that range from building mechanical devices to presenting their own interpretation of literary classics.

Team members work together at length to solve a predefined long-term problem and present their solution to the problem at a competition. They must also participate in the spontaneous portion of the competition by generating solutions to a problem they have not seen before.

While the long-term problem solution often takes many months to complete and involves various elements of theatrical performance, construction and design, the spontaneous portion occurs the day of the competition.

They bring their solutions to competition on the local, state, and world level. Thousands of teams from throughout the U.S. and from about 25 other countries participate in the program.

“Regardless if they won or not, they have gained skills they will use for the rest of their lives such as negotiating, compromising, teamwork, self-sufficiently and most importantly that mistakes are not failures, just new problems to solve,”  said Stefani Carporlingua, who coaches the team along with Danielle Cornacchio. “We cannot express how proud we are of their success.”

Team members, who proudly stood on the stage with OMER, OM’s mascot, to accept their first place trophy and medals, are now perfecting their performance and props in preparation for state competition.

And, they had great things to say about the OM experience thus far.

‘We tried our best and we did it.’

Faith: “This is a place (the team) where I’m able to create stuff. I love doing this. It feels like this is a place where I can ‘be me.’’”

Sylvia: “You can have fun. You’re free to come up with creative ideas to combine with others’ creative ideas to make the idea even better. This (win) meant we tried really hard and we succeeded. We did the best that we could.”

Samantha: “I’m in this for the experience. To win (states or worlds) would be a real bonus. My sister has done OM before and it was so nice to see her happy for us.”

Luciano: “All our hard work paid off. We tried our best and we did it.”

Fiona: “I was in disbelief when we won. It was my first year on the team and all of our hard work paid off.”

Olivia: “We worked so hard on everything and put a lot of effort into this. Now, we’re all best friends.”

Sam, the group acknowledged, is the one team member who is a “man of few words.” His simple response was: “It’s a fun creative club. I’m happy.”