Congratulations to Junior Amelia Bohr,  who has been accepted into the National Association for Music Education (NAfME) All-Eastern Treble Honor Choir.

This honor is extended to the most musically talented high school students in the Eastern region of the nation. Amelia will perform with other choir members from other states at the Eastern Division Conference, to be held in Rochester in April 2023.

“Amelia is an incredibly dedicated student who puts her ‘all’ into everything she does,” said Choir Director Danielle Cornacchio. “She is so grateful for all of the opportunities which have come her way, and I know that she is going to soak up every moment of her experience as a member of the All-Eastern Treble Honor Choir.”

According to NAfME, “with assistance from their music teachers and directors, these exceptional students will prepare challenging programs under the leadership of prominent conductors in this 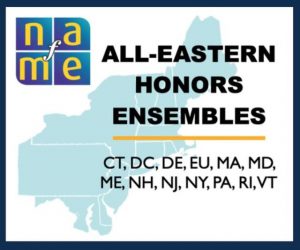 NAfME Eastern division state presidents oversee the selection process in their states during the spring and early fall of the year before the event and to compile ranked lists of recommended juniors and seniors for consideration.

How the lists are compiled may vary from state to state, although all recommended students must have participated in their home All-State festivals or have been All-State alternates (with the exception of Modern Band). Acceptances from each state are determined by a percentage of the total NAfME Eastern Division membership.

NAfME is an organization of American music educators dedicated to advancing and preserving music education as part of the core curriculum of schools nationwide. The NAfME Eastern Division includes Connecticut, Delaware, New York, Pennsylvania, New Hampshire, New Jersey, the District of Columbia, Maine, Rhode Island, Maryland, Vermont, and Massachusetts, along with a single affiliate for the European continent.