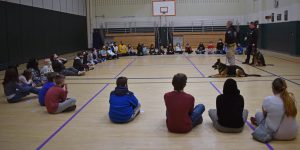 Trooper Jason Cole and  Officer Ryan Sinclair spoke to club members about the training and care that’s needed to become a K9 officer. These canine officers support the work of their human counterparts by, first, protecting their human officers. But they also protect the public, find contraband and explosive devices and apprehend criminals. Training for the roles begins as young as age 1. 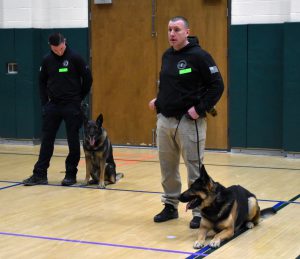 ”The main role of our K9 officers is to make sure we’re safe and we come home every night,” said Trooper Cole, whose K9 partner is named Nate and trained to respond to commands in German.  “Then, there’s those small things they like to find…like bombs.”

There’s two different kinds of K9 officers: Those who search for bombs, and those trained to find drugs.  These district roles require different training. 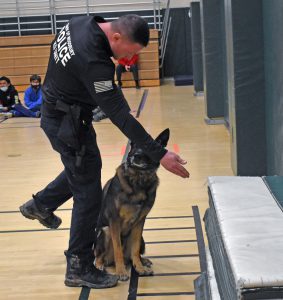 “When our dogs find ‘stuff,’ they sit,” said Trooper Cole. “’Drug dogs,’ in contrast, they find something and they rip it up. But we obviously don’t want our dogs ripping up bombs.”

Trooper Cole emphasized the dogs are keenly aware of their handers’ actions and what that means. 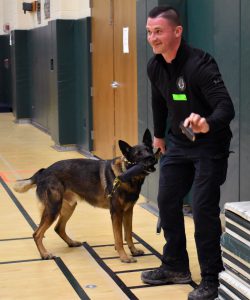 The law enforcement officers said their K9 officers don’t know what bombs are; they just know to seek them out using their noses, applying their skills to let their human partners know they’ve found something.

“They want to play,” said Trooper Cole. “All they want to do is play.”

When they’re not at work, K9 dogs live with their handlers and are in integral part of their families.

“Work is work,” added Trooper Cole. “But at home, they lay around on the couch, just like all of you like to do when you get home.” 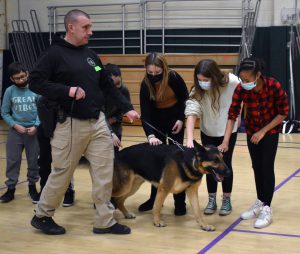 After the presentation, officers took questions and invited interested students to pet the dogs.

“We’re very grateful to Trooper Cole and Officer Sinclair to taking the time to show us the important role these dogs have in the Orange County law enforcement work,” said Pet Club Advisor Amy Sicina.  “These connections to the community are important and their visit was a great teachable moment to the students.”