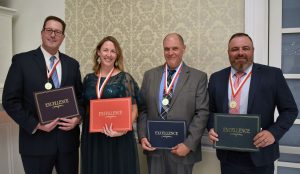 Three Minisink Valley staff members and one Board of Education member have been named recipients of the Mid-Hudson School Study Council’s 2022 Awards for Excellence.

Each year, the Newburgh-based organization honors those in the education field who display excellence in their work. Awards were presented to them and other honorees at a Nov. 3 gathering at Villa Venezia in Middletown. 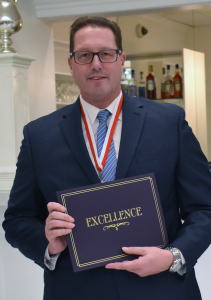 High School Principal David Telgheder was named a recipient of the Council’s Award for Excellence in Administration.

“As board president, I rely on the skills, commitment and talent of our employees to do whatever is necessary to support the district’s mission and whatever else may arise,” said Board of Education President Joseph Flaherty in his nomination letter. “In this case, Mr. Telgheder took on the interim principalship during a critical pandemic timeframe. He accepted this role without reservation and demonstrated to the board just 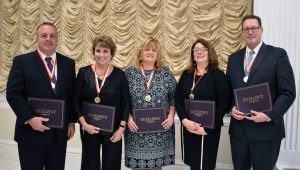 how much of a skilled  professional he is. In a time of need, Mr. Telgheder (a professional baseball player in his former life) stepped up to the plate…to steal a baseball analogy. We couldn’t ask for more from a better person.” 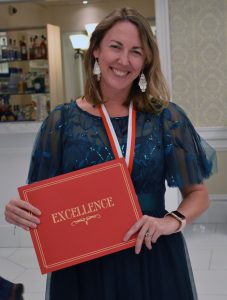 Physical Therapist Dr. Jennifer Lynch was named a recipient of the Council’s Award for Excellence in Pupil Personnel Services.

“Dr. Lynch has been a consummate professional in all that she does on behalf of our students and their families,” Superintendent Brian Monahan wrote in his nomination letter. “In her role as our school physical therapist, she is responsible for overseeing the physical therapy needs for all students on all our campuses as well as our homebound students.  She is a reliable and trustworthy resource to staff and 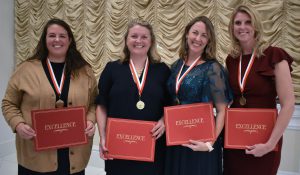 parents, especially when working with children with special needs. Like many here, Dr. Lynch is a community resident and has an intricate understanding of community issues, which helps her provide the best assistance to our students and their families. Our district is a truly a beneficiary of her talent and expertise.” 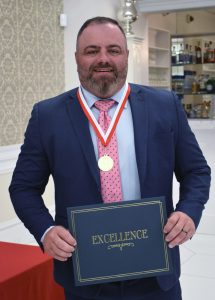 Board of Education member James Emery Jr. was named a recipient of the Council’s Award for Excellence in Board Service.

“Mr. Emery understands the function of this board and its importance,” wrote Mr. Flaherty in his nomination letter. “He takes his role seriously, asking pointed questions, offering thoughtful comments, making logical requests. He is willing to listen and compromise when needed, respectful of his colleagues and, most importantly, to the community members who attend our meetings. He understands that he represents the community, 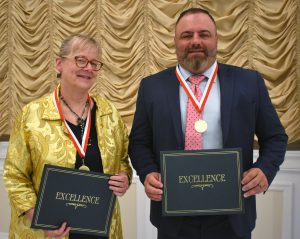 and spends countless hours talking to and listening to those in the community who want to share their thoughts and opinions.  He’s a mentor to new Board members and offers counsel to all when needed.  Mr. Emery is the Board member that every school district would love to have..” 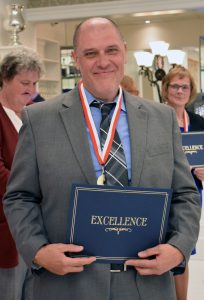 Building & Grounds Maintenance Mechanic Joseph Palazzo  was named a recipient of the Council’s Award for Excellence in Support Staff.

“Throughout his career and particularly during the height of the pandemic, Mr. Palazzo demonstrated just how valuable of an employee he is to the district,” Mr. Monahan wrote in his nomination letter. “He took on any role asked of him and quickly embraced what was needed to ensure all our air quality handling equipment was following all NYSED and New York State Department of Health guidelines. Our 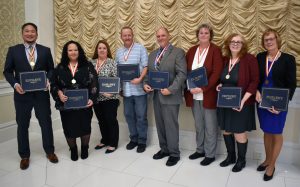 equipment functioned at peak levels and times because of him. He worked countless hours, with a cheery disposition, to ensure our buildings were beyond prepared for students and staff to attend when they could. He’s an integral part of our daily operations.  He is ‘the maintenance mechanic of maintenance mechanics.’ His commitment to excellence is an example for others to follow. I am beyond grateful that he is a member of the Minisink Valley Building & Grounds team.”