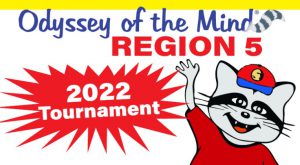 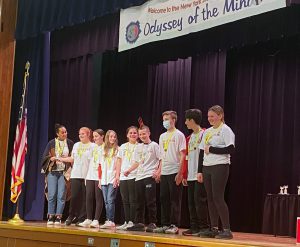 Congratulations to the Middle School and Otisville Elementary teams, which presented creative and “out-of-the-box” response to imaginative problems at the March 5 New York State Regional Odyssey of the Mind tournament, held at Orange-Ulster BOCES.

The Middle School earned second-place honors for its presentation of its response to the technical problem: “Odyssey ReOMvention,” sponsored by Arm & Hammer.™

The team presented a performance that identified an original threat to the environment that self-replicates until a team-created technical “reOMvention” removes the threat. The team’s setting reflected the threat and then return to its original state. The performance included original music, two animal characters, and must use Arm & Hammer™ Baking Soda. 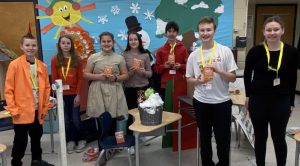 Team members are: Eighth-graders Colin Hansen and Luciano Palacios; seventh-graders Ava Semco, Dempsey Depuy, and Cailinn Lacenere, and sixth-graders graders: Rylan Young and Aubrey Gibbs. They were coached by Venicia Salguero and Corine Yanis.  They earned 332.45 out of 350 points for its presentation, including a perfect 100 points on the spontaneous component.  In competition, every team solves a spontaneous problem. This part of the competition is called “spontaneous” because teams don’t know what they’ll have to do until they enter the competition room. Solving spontaneous problems teaches students to “think on their feet.” 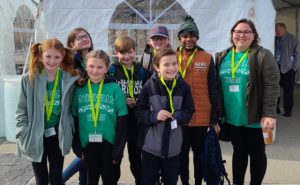 The Otisville Elementary team placed eighth in its division for its response to  “Life is a Circus.” The team created a performance about a young person enjoying a regular life in our world who wakes up one day to discover they somehow were transported into a circus world. In the circus world there will be original animals performing unexpected tricks, a clown, circus acts, and a ringmaster that announces the activities. The young person returns to the regular world thinking it was all a dream until they see a mysterious figure that turns out to be from the circus! 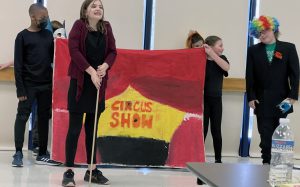 What is Odyssey of the Mind? 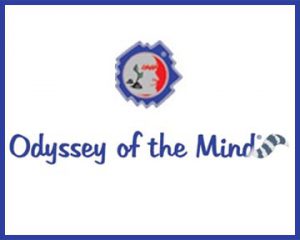 Odyssey of the Mind is an international educational program that provides creative problem-solving opportunities for students from kindergarten through college. Team members apply their creativity to solve problems that range from building mechanical devices to presenting their own interpretation of literary classics. They then bring their solutions to competition on the local, state, and World level. Thousands of teams from throughout the U.S. and from about 25 other countries participate in the program. It’s the only international program Minisink Valley participates in.

Teams of up to seven students compete in five different problems which encompass vehicle, technical, classics, structure and theatrical themes. Each team receives its problem in early October and then proceeds to build, tape, glue, paint and “test run” props and mechanisms to prepare the best solution to the challenge.