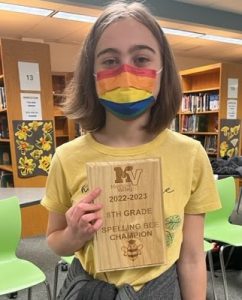 Congratulations to eighth-grader Juniper Saleigh, who won her grade level spelling bee and now advances to the Orange-Ulster BOCES Regional Spelling Bee, which will be held in March 2023.

Juniper’s winning word was “configuration.”  Her advice to other students interested in participating in a spelling bee is to practice.

Juniper will compete against students representing other school districts in the upcoming regional competition.  To prepare, the spellers will study “Words of the Champions,” the 4,000-word study resource provided by the Scripps National Spelling Bee.

The word “bee,” as used in “spelling bee,” is one of those words that has never been satisfactorily accounted for, according to the Scripps National Spelling Bee association. A fairly old and widely-used word, it refers to a community social gathering at which friends and neighbors join together in a single activity (sewing, quilting, barn raising, etc.) usually to help one person or family.

The concept of young people competing to spell words goes back to at least 1808,  however it’s likely there were informal competitions long before then.