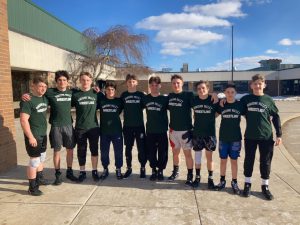 Varsity wrestling coach Kevin Gallagher called the tournament a great one, and was happy the hard work of all the wrestlers paid off.

“I am very happy for our kids that qualified for the state tournament but we did have some very good wrestlers that came up a bit short,” he added. “That leaves a pit in my stomach.”

“Our team is a powerhouse,” said Athletic Director Tim Bult. “We broke our 2020 record of 369 points, though we did that with 15 weight classes versus the 13 weight classes that currently exist. We are also beyond thrilled that Minisink’s Sophia Macaluso was the tournament’s first-ever female finalist. She has broken this glass ceiling for other female wrestlers to follow and we are very proud of her accomplishments.”

Congratulations to these Section IX Division I wrestling champions:

These 10 wrestlers will advance to the NYSPHSAA Championship tournament in Albany on Feb. 25 and 26.