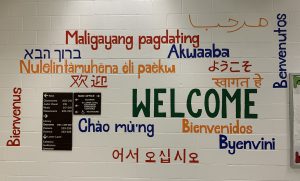 Minisink Valley Middle School recently installed a new “welcome mural” in its front lobby, which greets everyone entering the building in multiple languages. 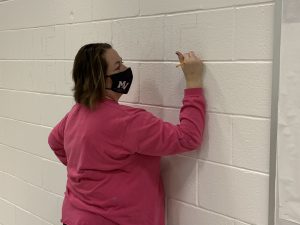 The mural was a project created and organized by the school’s Diversity Subcommittee and painted by middle school aide Vicki Sullivan. Paint colors used were chosen to match the colors of the recently installed diversity posters in all district buildings.

A meaning behind every included language

There is a meaning behind every language included in the mural, Mrs. Spicehandler explained. 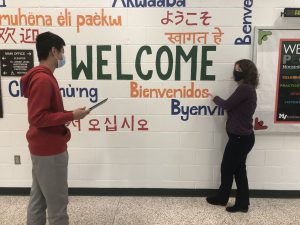 “We may have a student or students who speak it as their first language,” she said. “It may also represent a culture that is present in our school. We have many Jewish students and, therefore, you will see Hebrew on the mural.”

Additionally, said Mrs. Spicehandler, there’s many students who identify strongly with the Italian culture, so that language represented.

French is a middle school foreign language class option, so that language is included on the mural.

Munsee Lenape is also present on the mural, too, because that Native American tribe once resided in this area. 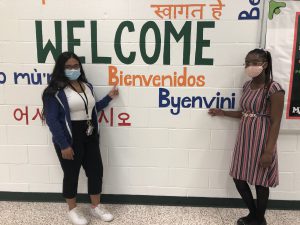 “You will also see Arabic, Creole, Chinese, Korean, Twi, Japanese, Filipino, Vietnamese and Hindi,” added Mrs. Spicehandler. “These are all languages which our students and their families speak.  We checked with students and family members to ensure accuracy of the languages represented before putting it on the wall.”

Mrs. Spicehandler stressed the mural is “live,” meaning that additional languages can and will be added if/when a new student comes into the building speaking a language not yet represented.

ENL teacher Patti Bourgeois and Mrs. Spicehandler have shown ENL students the mural to discuss its meaning and impact they hope it will have on the school community. 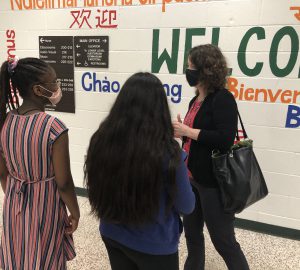 “We tell them how they were the inspiration,” she said. “They have been very pleased and proud.”

These students also agreed to help with the video the two teachers are creating. It will  feature students saying “welcome” in the languages that appear on the mural, teaching people how to pronounce the words.

“We are all so proud of the finished product,” she added, “and hope that everyone feels warmly welcomed as they enter the building.”