The proposed budget, which is still in development, includes $2.223 million less in proposed expenditures from this year’s budget.

District officials noted the initial proposed tax levy increase on March 1 was 11.8 percent; that amount was reduced to 9.4 percent on March 21.

Additional savings, a result of retirements from an incentive retirement plan presented to staff, further reduced the proposed tax levy increase to the current 8.62 percent.

Over the next week, work will continue to finalize additional budget reductions, with the final proposed budget and tax levy to be presented to the Board of Education on April 25 for adoption.

“We continue to put our very best efforts into finding every opportunity to reduce costs without impacting our student program,” said Superintendent Brian Monahan. “Over the last few years, we have been able to build an outstanding student program which we know offers our students the greatest opportunity to be college and career ready. We are extremely mindful of how important this is to our community and how we must be equally prudent with and respectful of the use of taxpayer
dollars.”

A three-year plan to achieve a balanced budget

This three-year plan is intended to preserve student programming and services and includes cost containment through staff attrition; elimination, reduction or deferral of purchases related to equipment, materials and supplies and contractual services; and declining fund balance use.

The current reduction in the proposed tax levy to 8.62 percent is the result of ongoing work to finalize all opportunities to reduce expenses while addressing the challenges tied to the budget’s development:

2018-19 projected deficit
At the beginning of the budget development process, district officials were originally anticipating a  $9.4 million shortfall in school tax revenue based on declining revenues and increasing expenses and a projected $4.8 million deficit in the 2018-19 year. This gap was created, in part, by increasing operating costs, a revenue shortfall in anticipated state aid and conservative tax levy recommendations over the last three years. (See graphic)

Declining state aid
Based on figures released by the state earlier this month, Minisink is projected to have a state aid decrease of $1.39 million in the upcoming school year. (See graphic) In fact, state aid is projected to be lower in 2019-20 than it was in the 2015-16 budget. (See graphic) Prior to the 2017-18 school year, state aid increased by approximately $1 million each year and contributed to revenues routinely exceeding expenses.  However, in recent years, state aid has not provided sufficient, sustainable increases to meet Minisink Valley’s operating costs. As a result, the district has needed to use fund balance to balance budgets—which is not a viable long-term solution.

Salary and benefit costs
Contractual obligations with employees and ordinary operating expenses have steadily increased over the past three years while state aid has lagged behind.

A negative tax cap
New York’s property tax cap law sets a threshold at which districts are required to obtain a higher level of community support for budget authorization; it does not provide for a two percent increase each year even though it is commonly referred to as a “2 percent cap.” In fact, due to variables in the tax cap calculation, Minisink will have a negative tax cap of -0.47 percent in 2019-20. One of these variables is the district’s first Payment in Lieu of Taxes (PILOT) payment of $861,000 from CPV.

What does the current proposed 8.62 tax levy mean? 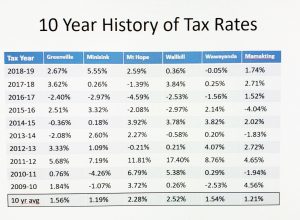 Budget development work continues and the district will continue to provide updates.