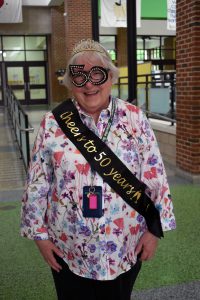 Otisville Elementary honored Karen Krogslund, one of its first-grade teachers, who will retire at the end of this school year after 51 years of teaching with a celebration involving the entire Otisville school community today, June 1, which was also declared “Karen Krogslund Day” by the Town of Mount Hope.

Mrs. Krogslund has spent her full teaching career at Minisink Valley.  It’s a rarity for a teacher to spend an entire career working in one district, and even more so for that timeframe to be 51 years. 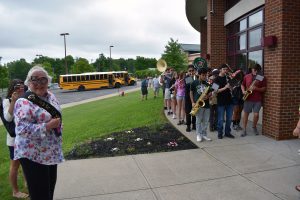 The Minisink Valley High School Band led the “K-5 Parade of Students” into the gym, with Mrs. Krogslund waving and clapping as they passed by her. They carried handmade posters, banners, flags and signs, with many younger students wearing handmade “50 Year” hats, some with Mrs. Krogslund’s photo as the main decorative element.

Many students and faculty dressed in 1970s era attire, to commemorate that Mrs. Krogslund first began teaching in 1971. 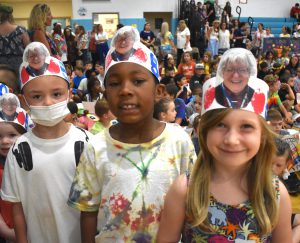 “Mrs. Krogslund began her teaching career, right out of college, as a kindergarten teacher with the former Otisville School District, before it became part of the Minisink Valley Central School District,” Superintendent Brian Monahan told students, faculty and invited guests. “I’ve estimated that she’s been a teacher to nearly 1,000 students, many who have remained living in our community. She has taught the children and grandchildren of some of her very first students. Anyone who has been a student of hers knows how special she is.   Anyone 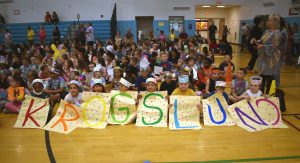 who has worked with her knows the same.”

“We would like to offer our appreciation to Karen for her constant support and promotion of youth in our community,” he said.  “She has taught many 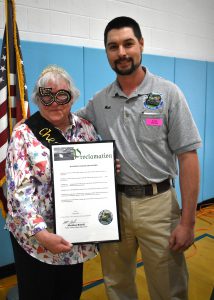 generations and hundreds of children who are now productive grandparents, parents, children and grandchildren in our area. Without Mrs. Krogslund, our community footprint would not be as it is today.”

Chris Krogslund, Mrs. Krogslund’s son, surprised his mother by embedding himself into the marching band and playing the snare drums, as he did when he was a district student. 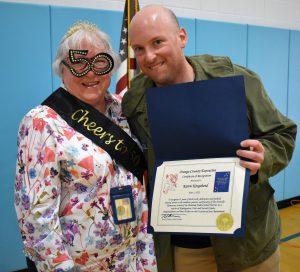 “The world would not be where it is without the commitment of public school teachers,” he told students, faculty, staff and invited guests.

Mr. Krogslund also offered this advice to students, which he said his mother had often told him: “If you do something you’ll love, you’ll never work a day in your life.” 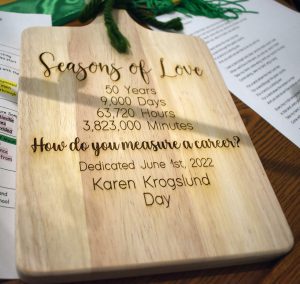 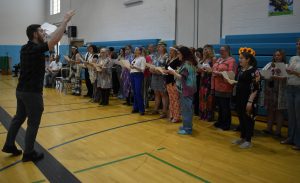 After that, students honored her with a song, too, singing The New Seekers’ “Free to be Me and You,” a song popular when Mrs. Krogslund first began her teaching career.

And later, Mrs. Krogslund’s green “Superhero Cape” was officially retired, and will become part of a permanent display honoring her legacy to the Otisville school 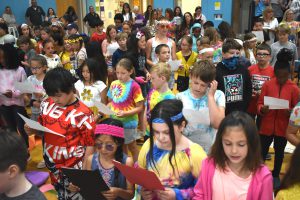 Principal Vincent Biele told students, faculty, staff and guests that Mrs. Krogslund was a blessing to all who have worked in Otisville over the years.

“Otisville Elementary is the house that Karen Krogslund built,” he said. “Karen’s kindness, caring and love for students are the bricks that have formed the foundation of this school building. Karen is a master teacher who has been a mentor and resource for our entire faculty and staff. Karen’s wealth of 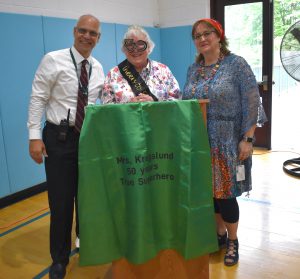 experience and willingness to help people has supported many careers in this school building. She has given her heart and soul to the people in this building and has never asked for anything in return.”

While Mrs. Krogslund received applause and cheers throughout the program created to honor her, students particularly liked what Mr. Biele asked everyone to do: Stand and give her 51 uninterrupted seconds of applause for each year she’s been a teacher.