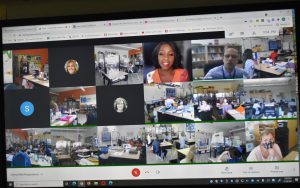 Ms. Wills — who has played herself in NBC’s “Law & Order: Special Victim’s Unit,” CBS “Golden Boy” and appeared in major motion pictures such as 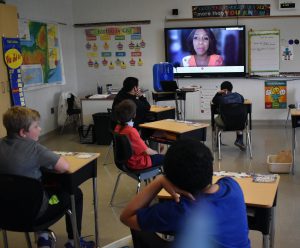 “Ghostbusters,” “Freedom Land,” starring Samuel Jackson and “The Brave One,” with Jodie Foster and Terrence Howard — presented “Emma,” the story of her great-great-great grandmother’s drive to achieve her goals, to the school’s  third, fourth and fifth-graders.

Her book is the sequel to “The Emancipation of Grandpa Sandy Wills.” This new book is the story about Sandy’s wife Emma and her perseverance, leadership, initiative and dreams to attain her goals. It also weaves in the themes of slavery, freedom and the fight for what’s due to a person.

Pandemic restrictions changed the way the school is able to organize assemblies and guest speakers for this school year. School administrators 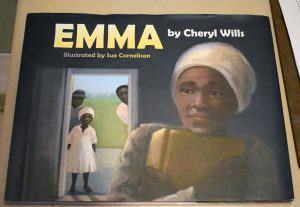 used the Google Meet technology that faculty, staff and students have used since the beginning of the school year to present Ms. Wills’ program to these three grade levels, with each class “attending” the assembly from their classroom, through the flawless use of technology. Remote students also attended, with Ms. Wills speaking with students from her Long Island home.

“This is a true story,” she told students. “One of the things I want you to remember is to ask questions to people in your households. You may be surprised as to what you find. Everyone has a hero in their home.” 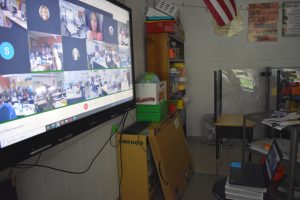 After a video presentation about the book, Ms. Wills spoke about the research process she undertook to make her book a reality, including census records and family trees.

As part of that, she spoke about her enslaved family, and the difficult life they lived. Great-great-great grandmother Emma could not read or write, which created difficulties for her when she needed to collect the military pension her husband Sandy earned.

Students asked a variety of questions during lengthy question and answer period, including how a slave’s surname came to be.

“When someone owns you, you take their name,” Ms. Wills said. “Sandy was owned by someone named Wills. Millions of African-Americans still have this legacy of slavery in their last names. I haven’t changed my name…yet. It’s a part of my 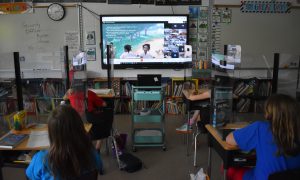 history. I want my original name from West Africa. I’m in the process of finding my original name. When I can pinpoint it, I will change my name. For now, my last name is evidence of a tragedy that occurred in my family.”

Ms. Wills also plans to locate the exact spot in the plantation where her great-great-great grandfather was buried and transfer his remains to a military cemetery to reflect his service the nation.

“Slavery was horrific,” she told students. “You’ve learned about those horrors. I would not have wanted to live through that period. That was a frightening time 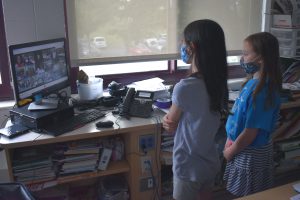 for anyone of African-American decent. But, anyone who lived through that, they became very strong people.”

“Our students loved her presentation and made an immediate connection with Ms. Wills,” he added. “A special thank you to our PTO for sponsoring this event and our technology team for their support allowing for a seamless virtual presentation.”