Students in Cynthia Muccari’s Otisville Elementary’s fifth-grade class related what they know about heroes while hearing firsthand from a 9/11 first responder hero in a lesson the day before the 20th anniversary of the attack on the World Trade Center and nation. 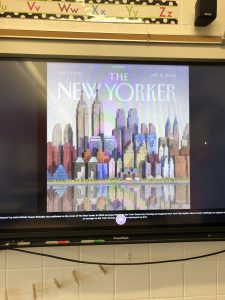 After learning about the Sept. 11 attacks, Mrs. Muccari showed them a cover of The New Yorker, which displayed doubles of different buildings in Manhattan.

“What do you notice about these buildings?” she asked.

Joseph Voigtland said:  “There are two of each building like the Twin Towers.”

The cover, issued two years after 9/11, showed two of each building to represent the solidarity of Manhattan and respect to the Twin Towers and World Trade Center on that day.

Who are heroes and what do they do?

This cover led into a discussion about heroes and who they are.

“They are heroes because they go and save other’s lives,” said another.

“They risk their own lives,” another added.

Students also discussed what they can do to honor first responders, such as “respect them,” and “treat them like you would your own family.”

Mrs. Muccari taught her students about how on each anniversary of 9/11, there are pillars of two blue lights displayed where the Twin Towers were to represent them. Another tribute is when a single white rose gets placed at someone’s name that’s inscribed on the 9/11 Memorial. This means that it is that person’s birthday and a special way to remember a loved one. 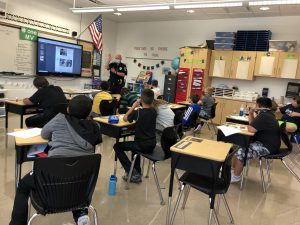 A visit from a hero

After the discussion, Otisville SRO Officer Burke — who was a NYPD sergeant stationed in the Bronx in 2001 —  stopped by to talk about his experience on that day.

Students got a first-hand account of what the day was like for a 9/11 first responder. He spoke about how even before he was a sergeant, he worked in the World Trade Center on the 88th floor. He was there during the World Trade Center bombing of 1993, where he was able to travel down the flights of stairs to safety. Because of this, he had experience that helped him on 9/11, he told students.

On that day, Officer Burke’s brother called to let him know what was happening and he quickly left to go to the site to help.

One student asked: “How long did it take you to get down to the towers?” 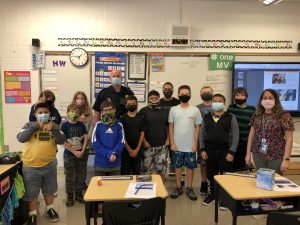 Once there, he and other first responders helped people out of the two buildings. His work continued for days after.

“What acts of heroism did you witness?”

Officer Burke said felt scared, angry and worried for other people, especially his co-workers and friends in the area. He was tired because he worked relentlessly for hours and hours without a break, he explained, adding that even though it was a devastating day, it was great because everyone worked together. 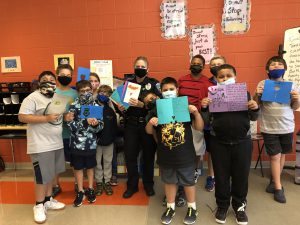 People came and gave first responders food and everyone came together in light of the events, he stressed.

Does Officer Burke see himself as a hero?

“Not really, I just feel that it is my job,” he said. “It was a tough day but we did the best we could.”

Mrs. Muccari’s class ended the lesson by making cards for members of the Mt. Hope Police Department and presented them to Officer Johnson, another Otisville SRO, on Sept. 10. The cards were intended  to show appreciation to Officer Burke and the rest of the department who help to keep the community safe and protected each day.

“We hope everyone takes the time this Saturday to remember the heroes on the 20th anniversary of 9/11,” added Mrs. Muccari.