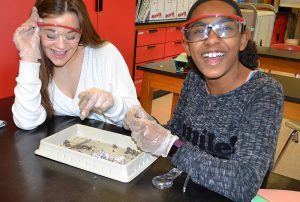 And, what exactly are owl pellets?

“They are the regurgitated remains of an owl’s meal, including all the bones of the animals it ate, usually small rodents,” said Mr. Hoffman. “Owls usually swallow their food whole, digest the edible parts, and then expel the indigestible parts through their mouth as a pellet. It might sound gross, but dissecting these is a project most kids love.”

The connections to science are obvious. 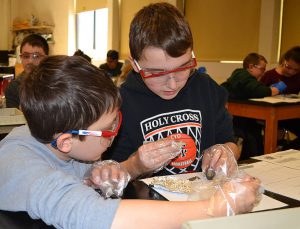 Students used the links provided by a dichotomous key to find the likely  habitat and diet of each species found in the pellet.

“Dichotomous” means “two branching.” The structure of the key is such that each question is actually like a tree branch that has two smaller branches proceeding from it as demonstrated on the next page. It’s a tool that allows students to determine the identity of items in the natural world, such as trees, wildflowers, mammals, reptiles, rocks and fish. Dichotomous keys are useful because they allow non-expert users to identify organisms by directing them to look at the known, important organisms.

Students recorded the information on answer sheets and labeled the skulls by number.  The key was used to identify them, record the species of each skull and match other bones to each skull.