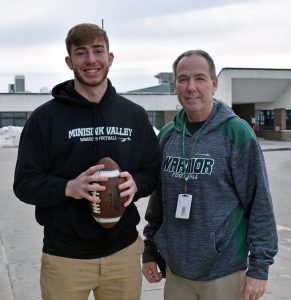 Kai will be presented the award at the upcoming NYSHSFCA Awards Banquet in Verona, N.Y.  He is the first Minisink Valley player and only the third Section IX football player to receive the Scholar-Athlete of the Year award in NYSHSFCA’s history.

“Your hard work and dedication to the great game of football and in the classroom has earned you the respect and admiration of your peers, athletes, community, and family,” wrote Steve Virkler, NYSHSFCA awards chairman in a congratulatory letter to Kai. “Your time and effort on and off the football field does not go unnoticed.”

Kai’s football accomplishments are impressive. In addition to being a member of the 2021 Section IX varsity football championship team, Kai was also named to the Section IX first team and Section IX All-Conference team.

“It’s an absolute pleasure coaching Kai, he is not only a great quarterback but an even better person,” said Varsity Football Head Coach Kevin Gallagher. “I knew he was special when I saw him in middle school.  Then,  after speaking with him, I knew he was ‘the full package.’ Kai has incredible football skills and knowledge of the game. He’s so smart on the field and can make immediate game changes when needed. Kai is also well liked and respected by his teammates and the whole school population. If you know Kai, you like Kai.”

Kai was named both the 2021 KOT845 Player of the Year and the 2021 John Bell Memorial Award recipient for his dedication, sportsmanship, loyalty and school pride.

While Kai attended Paramus Catholic High School for the last school year, he returned to Minisink this school year to complete his academic and football career.

Academically, Kai’s GPA is 98.54. He’s earned High Honors every quarter and is a member of the high school’s chapter of the National Honor Society. He is president of the Varsity Club, and also served in that role in 10th grade. He is a recipient of the HOBY NYS Leadership Award.

Kai was offered numerous scholarships, which included Harvard, Columbia and Princeton universities, in addition to nine Division I full football scholarships. He has committed to Princeton University for this fall, where he will major in economics and finance and play quarterback for the Tigers.

“This is quite an honor,” added Coach Gallagher. “This is a well-earned award. We’re looking forward to following him during his football career at Princeton University.”