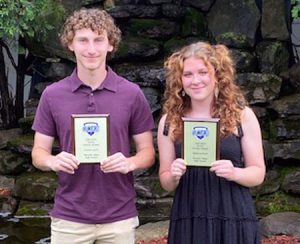 Rebecca’s GPA is 100.27. She has been a member of the varsity Cross Country, Indoor Track and Track and Field teams. She’s served as Cross Country team captain for two years and has earned 11 varsity letters.

She volunteers for the Goshen Humane Society and the Greenville Resource Center. Rebecca has also been involved with extensive National Honor Society and Key Club community service and activities and has been a part of the high school’s Art Room Mural Project.

She will attend Tufts University and plans to double major in child development and illustration.

Connor’s GPA is 100.34. He has been a member of the varsity Cross Country, Swimming and Baseball teams. He’s earned six varsity letters and has been a sectional qualifier.

Connor is a member of the National Honor Society, Study Buddies, and is an officer with the school’s chapter of the Future Business Leaders of America (FBLA).

He volunteers with the Middletown Warming Station, Project Graduation and the Port Jervis Library.  His community service work includes the Highway Cleanup and Recycling Programs.

Connor will attend the Rochester Institute of Technology and plans to major in bioinformation/computational biology.

Criteria for this award are for honorees to be in the top 20 percent of their class; participate in at least one varsity sport; be an above average athlete; and exhibit outstanding citizenship.

“Our honorees are  examples for other student athletes to follow,” said Athletic Director Tim Bult. “We are very proud of their academic and athletic accomplishments.”

The event was attended by honorees, their families, school district personnel and  OCIAA Executive Committee members.