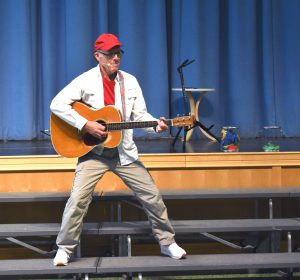 Tying into the “Otisville Superheroes are Bucket Fillers” school year theme, Otisville Elementary students were treated to a Jan. 13 visit by singer/songwriter Red Grammer, who reinforced important bucket filling concepts through his comments and songs to students during two assemblies. 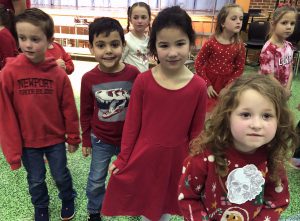 Mr. Grammer is considered one of the premier children and family entertainers nationwide.  He’s appeared on The Disney Channel, Nickelodeon, The Today Show and CBS This Morning and visits schools across the country.  Parent’s Magazine calls him “the best voice in children’s music.” 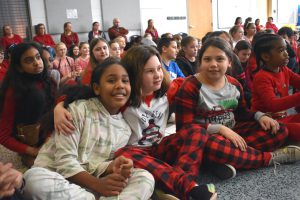 During the Otisville assemblies, where students and faculty wore “red for Red,” he performed selections from his album “Circle of Lights: Songs for Bucket Fillers.” Those songs, like others in the albums in his discography, focus on teaching human values including truthfulness, gratitude, integrity, kindness and fairness. 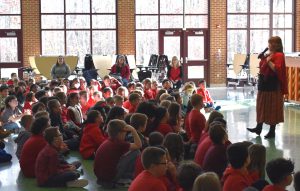 “Red’s visit to Otisville is another way we’re instilling important character traits of a bucket filler,” said Principal Julia Downey. “The bucket represents a person’s mental and emotional self. A bucket filler is someone who says or does nice things for other people. ‘Bucket filling’ is a term that has become a popular metaphor in education when talking about positive attitudes, behavior, feelings and emotions.” 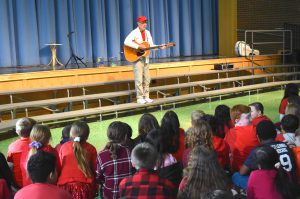 This school year, she explained, faculty and staff have been reinforcing to students that each person carries with them an invisible bucket. When that bucket is full, the person is feeling happy, confident, secure, calm and content. But, if a person is carrying an empty bucket, they’re upset, feeling down, dissatisfied and unhappy. 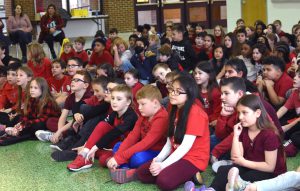 “Bucket-fillers are people who act in a way that fills another person’s bucket, and refers to those who practice kindness and good behavior,” said Ms. Downey. “By being kind and caring, students have the ability to help fill the buckets of their peers and to better understand how they have an impact on the way that others feel. These are important social and emotional skills for students to know. Once they begin to fully understand this concept, they clearly see how their words and actions can contribute to the good mental health and wellbeing of others in addition to themselves.”

During his performances, Mr. Grammer also reinforced this concept through his music, telling personal stories and inviting faculty members to join him for impromptu improvisations demonstrating the bucket filling theme. 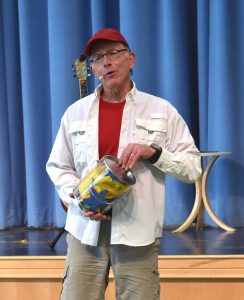 He spoke about the importance of being kind, helping those who may be struggling, paying compliments, being respectful and showing someone you care. He used a transparent bucket, with a lid, to show how those actions can fill a bucket.

Likewise, Mr. Grammer spoke about the concept of bucket dipping, where a person does things to cause other people to feel bad, which empties their bucket. Examples include making fun of someone, saying unkind things, refusing to help or teasing and bullying someone and being disrespectful. 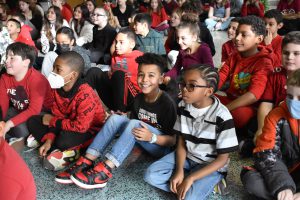 Additionally, Mr. Grammer spoke to students about “using the lid on your invisible bucket,” meaning how to protect one’s emotional and mental health. He reminded students they can protect the good thoughts and feelings they’ve gathered by placing a mental shield, or lid, over their bucket to prevent anyone from “dipping in” and taking important emotional items out of it.  The idea is for students to have the self-ability to quickly deal with negative situations so the positivity in their personal buckets remains. 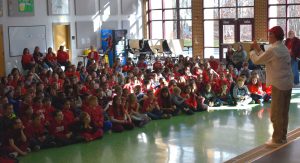 “There’s many lessons here,” added Ms. Downey. “An important aspect of the bucket filling concept is that children and adults can better express how they’re feeling and better understand how they have a positive impact on the way that others feel. We don’t want them to be bucket 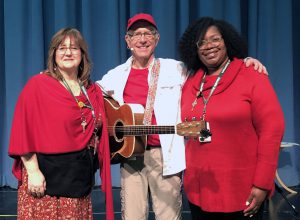 dippers. And, we also want them to have the skills to protect their good thoughts and feelings. Together, all of these will help our students better interact with their peers and adults and successfully deal with any challenges that might come their way. Our students understand they have the power to be bucket fillers.”