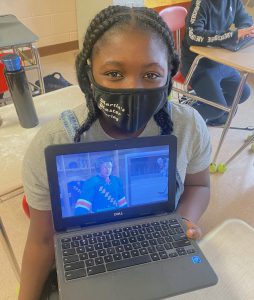 Nicole Lee and Andrea Ferguson’s sixth-grade science students are having opportunities to refine and practice their STEM skills through a program involving the New York Rangers, another innovative way Minisink Valley faculty are blending real-life with education opportunities in a way that makes learning creative and fun.

Called “New York Rangers Future Goals,” the online program is sponsored by the NHL and NHLPA and teaches students using interactive gameplay and real-world scenarios with the fast-paced game of professional ice hockey as the 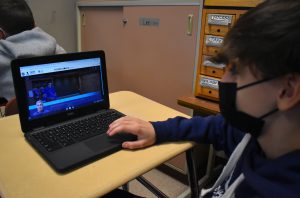 Students eagerly participated in the trivia portion of the presentation, often surprised at how much they knew — or didn’t know — about the team or hockey in general.   For example, a hockey player can travel the ice as fast as 20 mph.  Hockey pucks used in games are always frozen. The team has won four Stanley Cup championships. A “hat trick” is three goals. The blue lines on a hockey rink are examples of parallel lines.

There’s a lot of math and science involved in hockey, such as the engineering behind equipment; how to calculate the ice surface’s area and volume; circumference, area of circles, radius and diameter; states of matter and phase changes; examination of mass, velocity and kinetic energy; manipulating variables to run experiments; and data analysis and the drawing of conclusions. 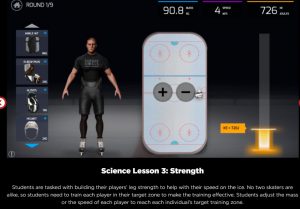 When they delve into the available science lessons, students will be able to learn about strength, as an example.  They’ll be tasked with building their virtual player’s leg strength to help with their speed on the ice. Because no two players are alike, students need to train each player in their target zone to make the training effective. They will need to adjust the mass or speed of each player to reach each player’s target zone. 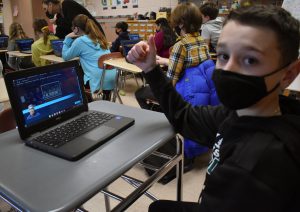 Or, a math scenario would be students being tasked with hitting the puck across the ice such that it will stop at a specific spot. However, the friction of the ice changes depending how fresh and how cold the ice is. Students will need to adjust their shot force and the friction of the puck to successfully land the puck.

“The kids had a great time,” said Ms. Lee. “So many of them are Ranger fans, so this online opportunity gives them a chance to learn more about science, math and hockey. It’s like our own hat trick!”

The Rangers’ participation in the program is part of its “Rangers in the Community” program. Learn more by visiting: New York Rangers Future Goals Hockey Scholar Program.